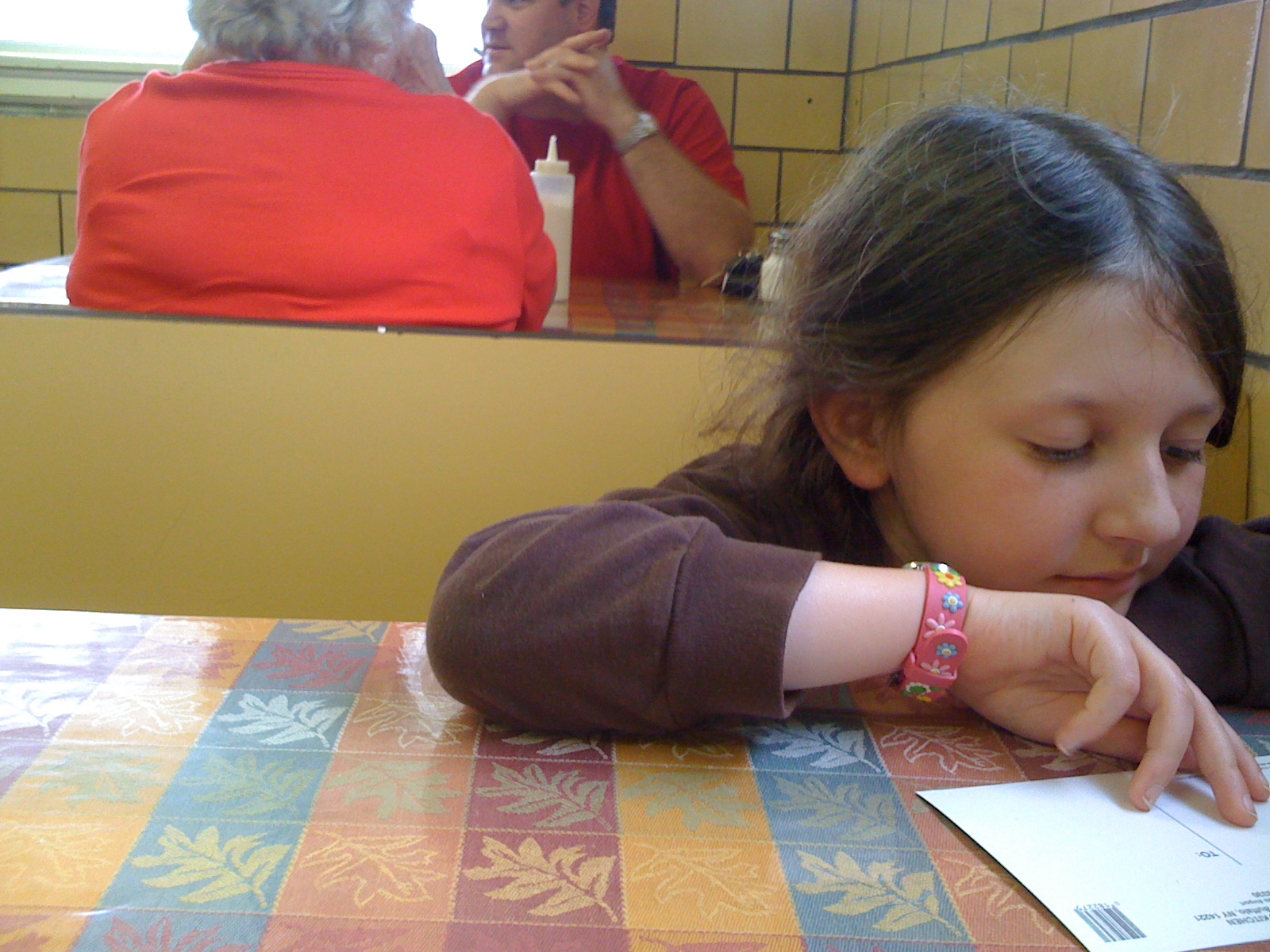 In so much as you might like to hear all sorts of idyllic stories about the first annual camping trip of my not always so idyllic family, I cannot please you. I can tell you this. There were smores. And we did stay dry within our tent.
Even though there was plenty of rain outside of the tent.
And although when the weather report teased and threatened with severe thunderstorms for a straight 48 hours, we panicked and tried so desperately on my failing cell phone battery to find a hotel in which we could dry our sad non-outdoorsy little selves, there was, alas, not a hotel room to be found in all of Ontario.
No problem! We stayed dry within our tent. And of course, as usual, the weather report was wrong.
And so, non-idyllic as we might be, it was a success!
In other news, we saw our dear friends well married, we went to Niagara falls and could not find a parking spot (and so did a drive by), and we fed our children far too many Canadian candy bars so that they would stay quiet, which they of course did not, which you know if you have ever fed your children too many candy bars as a coping mechanism for a 10-hour car ride. As one who grew up as an only child, I felt like I was living the American dream. It was truly glorious. Joey and I jumped into some sort of scripted parent language, universal enough to be the stuff of all family odysseys.

and, just an hour or two before we finally hit home again,

Me: Sadie, if you don’t chill out and stop hollering, I swear I will never give you a pen again for the rest of your life. Ever. Pencils for you!

And you get the idea.
But we made it. I’m sure you’re all very relieved. And of course, I have a few little food items to share with you.

The first night of our little trip, we camped in Ithaca, NY. It was a little out of our way, but I insisted. I wanted to go to the Moosewood Restaurant.

I know. I know. But I wanted to! I’ve been cooking out of Moosewood all my life– looking at those little black and white photos of the wooden tables in the utopian collective restaurant. I’ll say now before I go on, that I will always love every single Moosewood cookbook. My experience in the room where it all started will stay entirely separate from my love of spinach ricotta pie and buttery onion soup.

Of course, it was bad.

The menu changes daily, which is usually a good thing except when there is nothing you want to eat. The featured appetizer was sliced bread with pesto. Or you could have some olives. And for dinner, it was either noodles with butter and cheese and cream and a little bit of sliced carrot and zucchini, or some sort of eggplant stew, or something wrapped in Filo (should have gone with the Filo! Always go with the filo!), or overcooked bluefish in some tasteless chopped tomatoes and sad drowning leeks. Joey got the pasta, Sadie and I shared the fish, and Rosie got plain noodles and butter. Rosie really summed up the collective response when she had a few bites of her never-fail menu choice and looked up at me in confusion. “Mom, I don’t even like this!” Sadie tried to love it- she cooks from Moosewood too and had been looking forward to the meal the whole day. She passed over the rubbery bluefish after a few attempted bites, but swiped the roasted corn from the plate before I could get a bit. “The corn’s good!”
I know that the Moosewood collective isn’t known for it’s inventiveness, but it was a little heartbreaking how entirely uncreative the menu really was. The ingredients did not taste fresh, or at least if they had been earlier that day, they had the life cooked out of them. The place smelled like dirty mop water. I figure this is one more example of something you really can do better at home.

I guess you can tell that I’m slightly heartbroken. I was the kid who had been dreaming of Disneyworld and then got there to a swearing actor under the Mickey Mouse costume. I know it makes sense- they really don’t have to work for it anymore. People will come to Moosewood even if they serve McDonald’s and call it a McMollieKatzen. But why go to all the trouble of seeming so fabulous, just to serve noodles dripping in melted butter for 14.95? Maybe it was an off night. Maybe if I were there today, I would melt with joy! I guess I’ll never know.

I will say that our waitress was lovely, and that the dessert, a Moosewood Brownie topped with local ice cream, was flawless. So, if you too are on a pilgrimage to Ithaca, I suggest that you make sure that you get the waitress with the big flower pinned in her hair, and just skip to dessert.

The real joy in all of this, I must confess, was that although I dragged us hours out of our way to eat bland and overpriced food, Joey smiled through the whole thing, and never made fun of me once. You see, if anyone understands the food odyssey, it’s Joey.

We don’t get out to the nicer restaurants so often. But when we do, it’s usually when we’re traveling and I’ve heard something that makes me feel like we’ve just got to go there. But I’m not the one who usually leads our travel eating. That job belongs to Joey, the road food master. 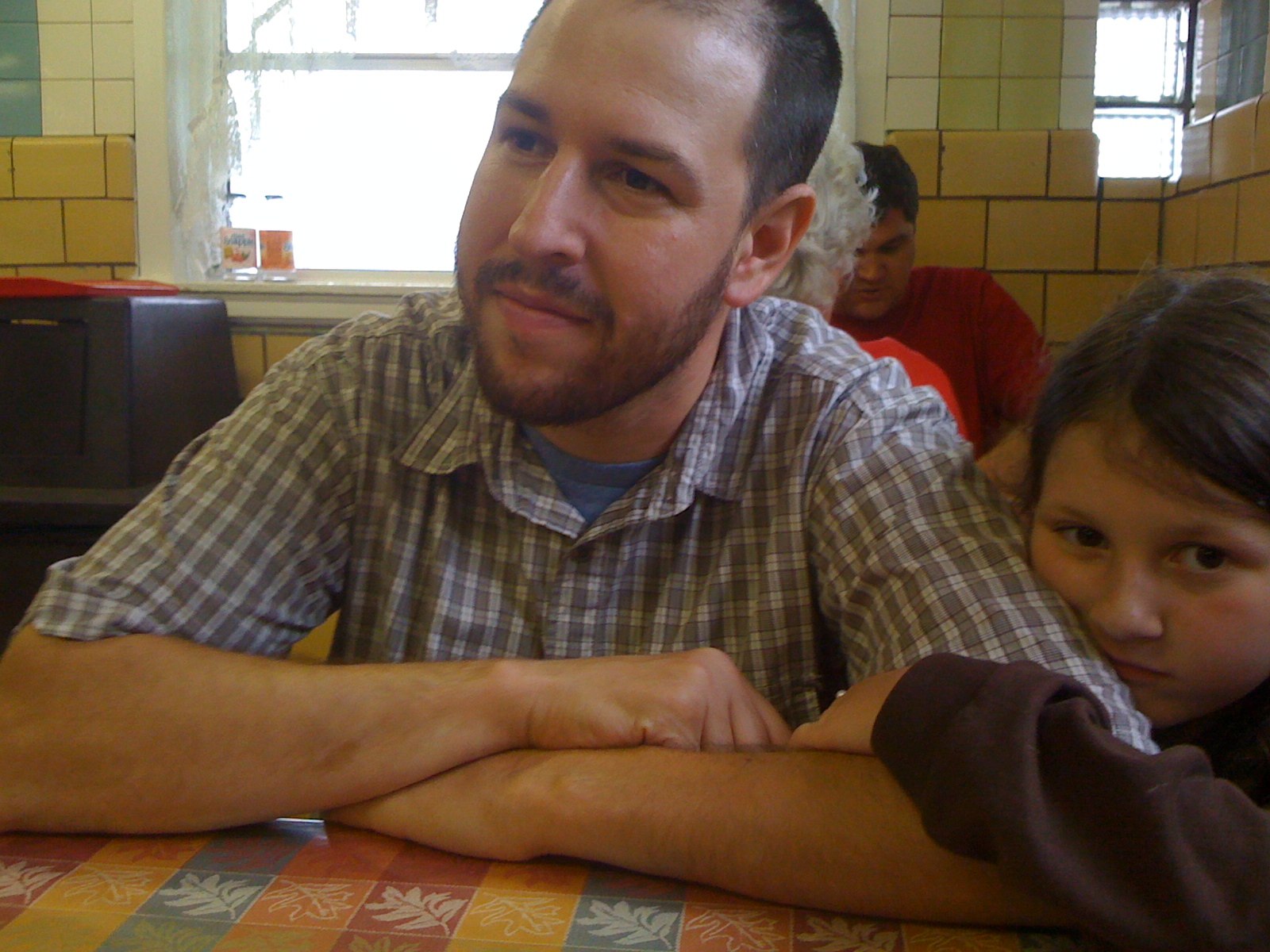 And so, the day after our dinner at Moosewood, Joey pulled off at a random exit near Buffalo, and he drove towards the airport. “Oh, this is going to be good,” said to me, but even more to himself.
It seems that we have an agreement when we are out in the world and searching for a meal. As long as our hearts are in it, we will follow the other around. And as Joey said as we ate the lunch that was about to occur, it all works out. Because sometimes the places are bad, and we have both been responsible. As he said in Buffalo, for every Moosewood in Ithaca, there is a Caiola’s in Portland. And for every Teo’s (what is that on the chili dog? That’s not..no..it can’t be…it’s too gross to even say!) in Pittsfield, there is Charlie the Butcher’s. 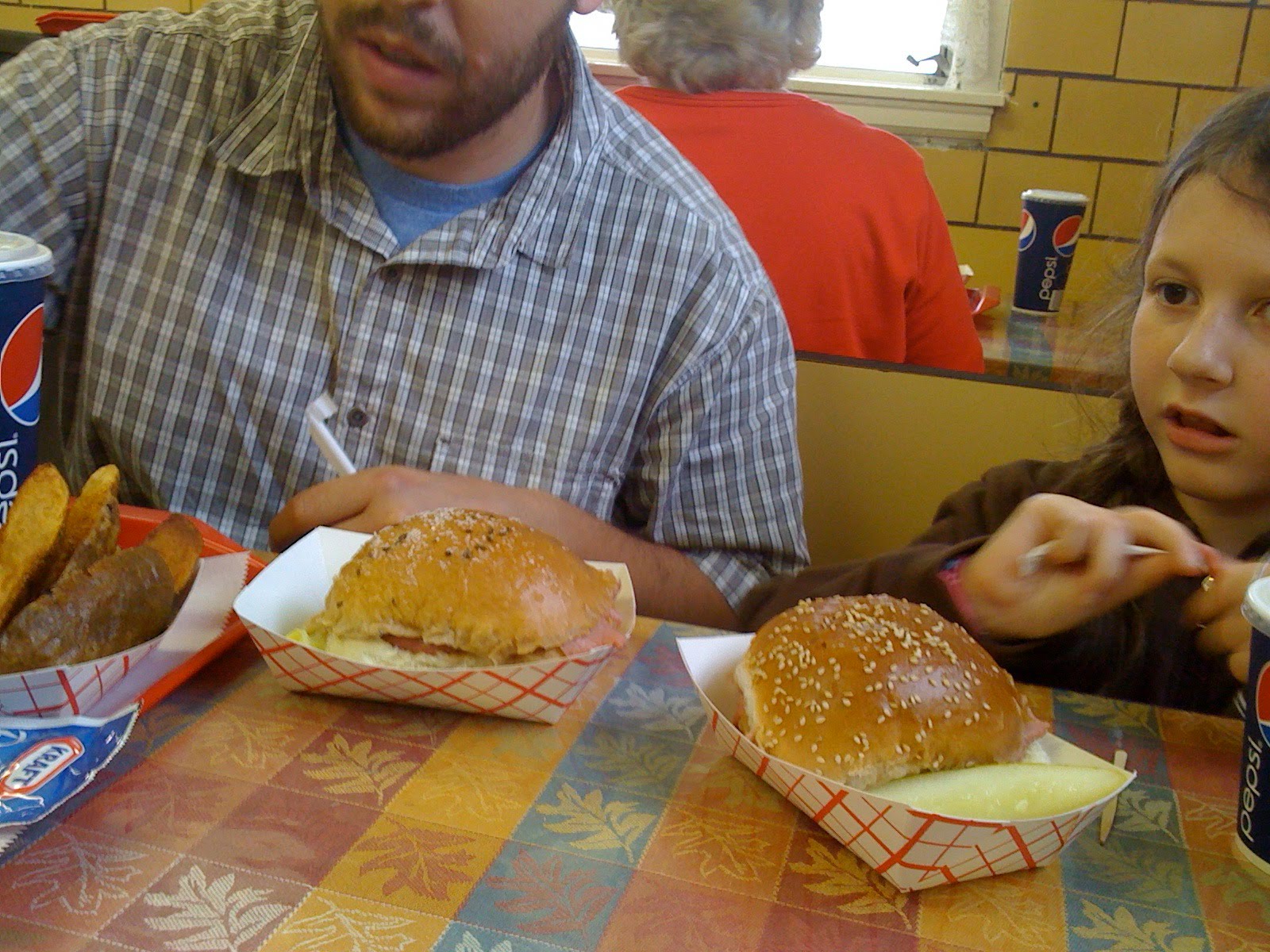 Way back, we stopped in at another Roadfood success, All Star Sandwiches in Cambridge, MA. I had a beautiful thing called a Beef on Weck, a perfectly cooked roast beef sandwich on a soft kaiser roll sprinkled with coarse salt and caraway seeds, smeared with horseradish. It was one of the best sandwiches I’ve ever had, and we learned there that the Beef on Weck hails from Buffalo, and it is in that northern and desolate city that it finds its perfection. When we finally reached Buffalo, Joey had of course done his research, and so we found ourselves at Charlie the Butcher’s. 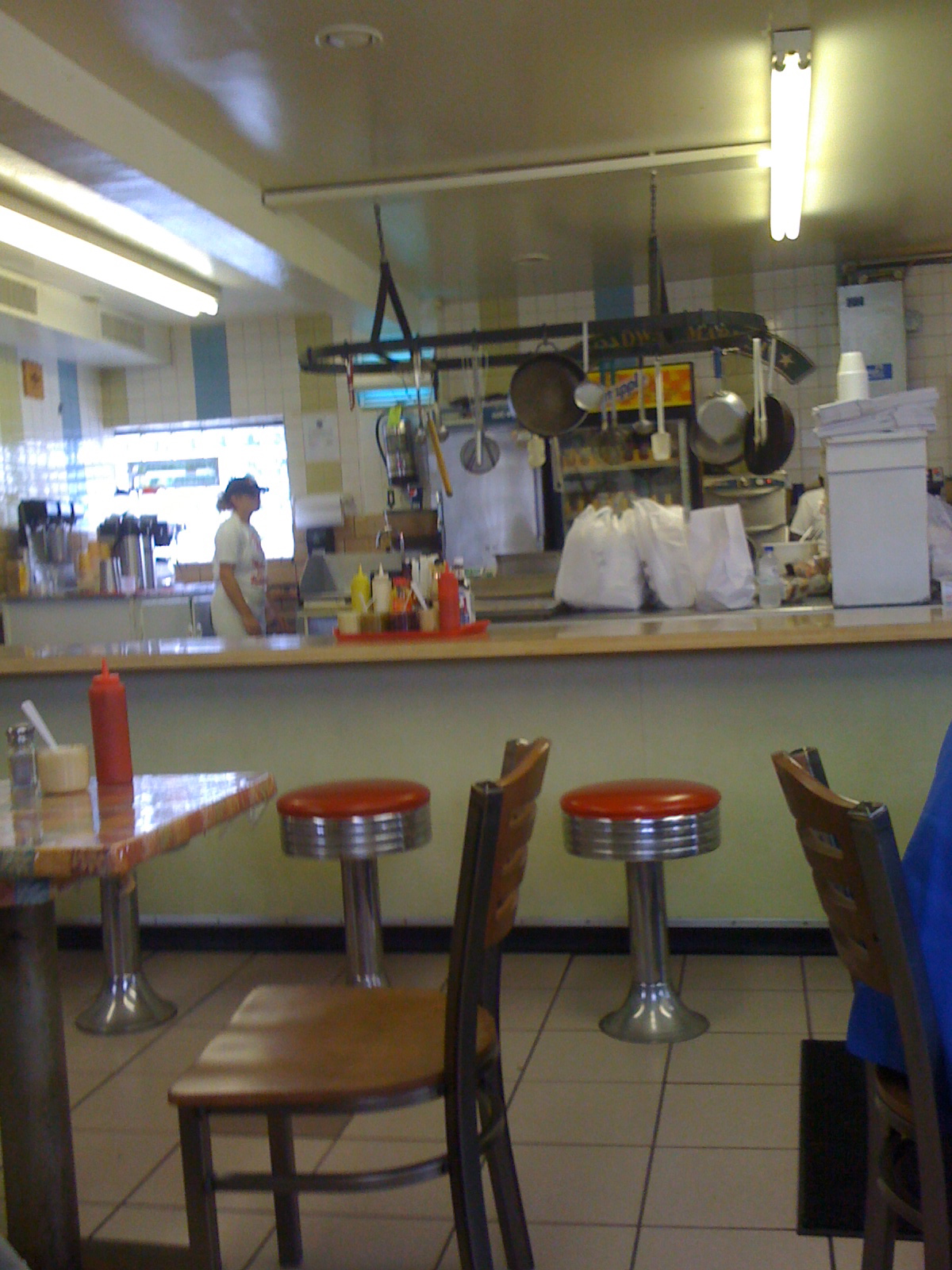 Charlie the Butcher is an actual person, and you can identify him by the hard hat he wears while carving roast beef. There are many branches of his restaurant at this point, but only the location on Wehrle Drive can boast that Charlie himself is doing the carving. He’s been doing it for quite a few decades, and I sure hope he’s teaching the secrets to others. This is an art that should not be lost. 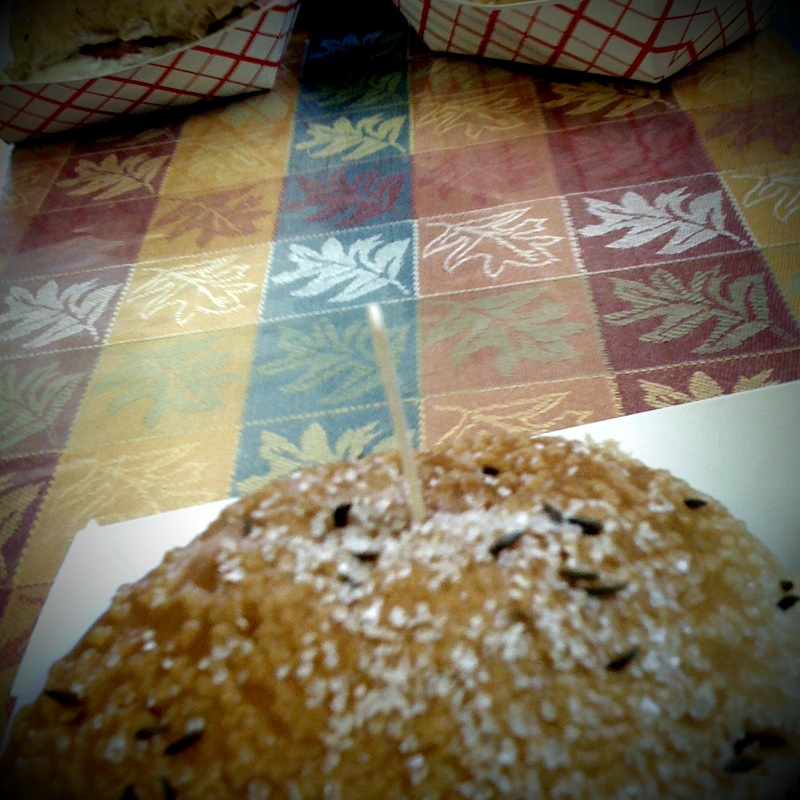 What is a beef on weck? Well, quite simply, it is the exact opposite of a plate of overcooked bluefish in tasteless tomatoes and drowned leeks. It is the thing that might save you on a long long drive. It is your turn off to the airport, even though you are not going on a plane.

And so, as we return from our travels, wet tent spread out on the lawn, I can say that although I cannot offer so many idyllic outdoor family stories, I can tell you that we are damn good at finding lunch off a random highway. I’m fairly sure that there will be a whole lot more family camping in the future, but I am even more sure that we will always be up for a food adventure, and the sad buttery noodles will be always be worth it for the hidden beef on wecks.