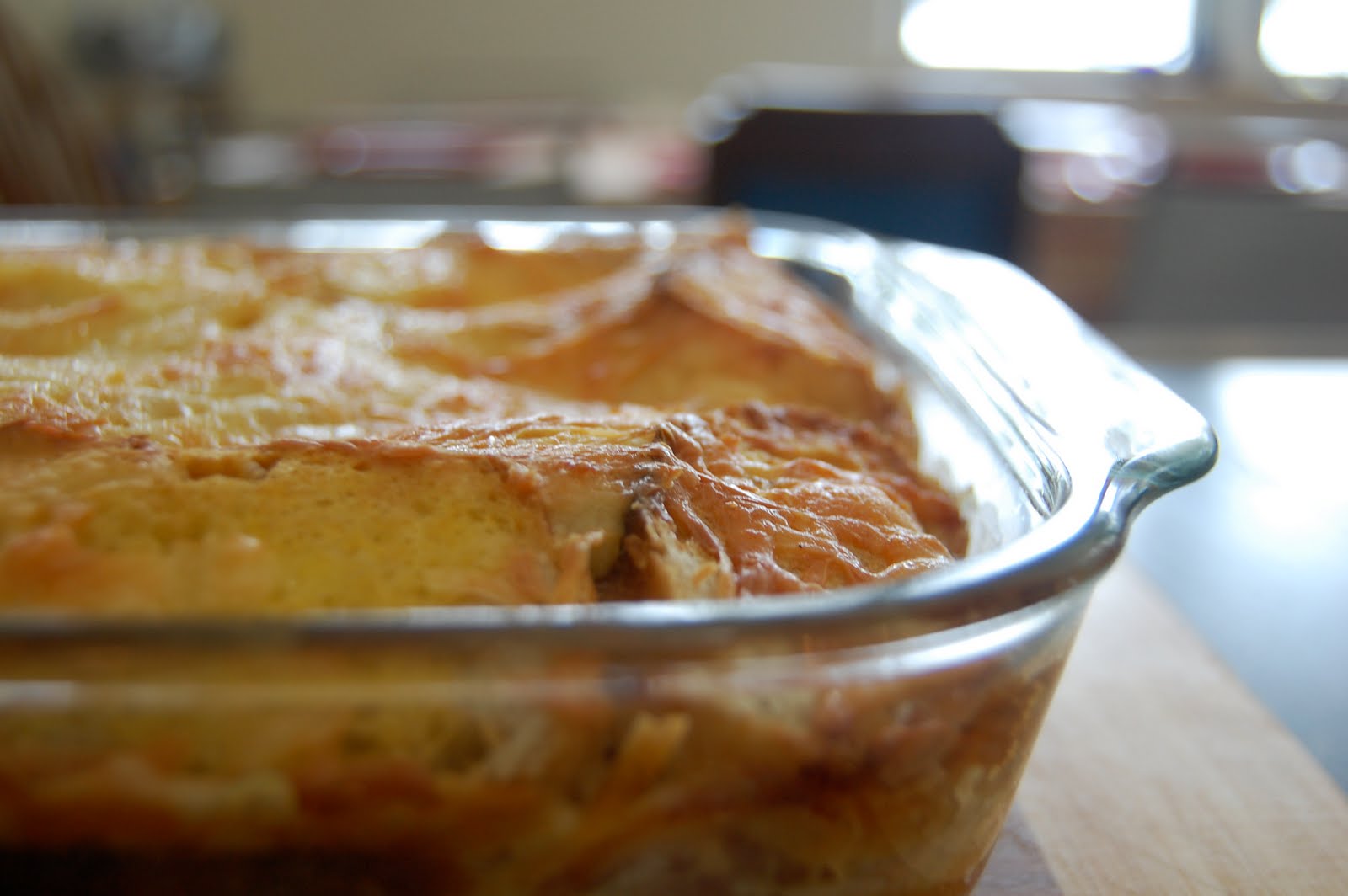 Oh old bread, how I love you. Hard and impenetrable, past your prime, you will feed us all.

Last week, I ran into a cheese shop that sells not only cheese, but also expensive mustard and caramel corn from France, and most importantly, big crusty baguettes. I had garlic bread on the brain, and although I know I was asking for it by running in at 4:55, I was a little bit heartbroken to see the bread shelf empty. Opening my gaze, however, revealed a floor basket filled with bread marked “day old.” It was, as I mentioned, the end of the day, and so this bread was pretty much day after day old. As I grabbed two loaves, I swear I heard little cries of “yippee” from the bread itself. The owner, who was on the phone, swiped at me. “Is that all you want?” he asked. “Take them. I would have just thrown them out.”

Thrown them out? Thrown them out! Perfectly hard bread, waiting to be soaked in the liquid of my choice, waiting to be given a second life? I have worked in bakeries before, and I have thrown out hard bread, but that was before I truly understood that a two day old baguette is worth its weight in gold. When he offered the two loaves to me, I had to remind myself to be graceful, to accept what I was given with a smile and walk away. But the basket on the floor- it still had one, two, three…ten loaves of bread. Ten! With that bread, I could feed you all. I would give you custardy bread puddings, crunchy croutons infused with garlic, brothy soups that would warm your soul. I know you’ve heard this all before- but I am a broken record when it comes to old bread. I can’t help it. It’s a little overwhelming, I know, but I can’t help wanting to feed you something lovely. With all those loaves of stale perfection, I would make you a strata.

Strata is similar to bread pudding, but has less of a custard feel and more of a straight egg base. It is suitable at any time of day, for any meal you choose. But if you want to give the strata its due, if you want to let it walk on stage and really shine, then you will invite a few friends over and have yourself a nice little brunch. 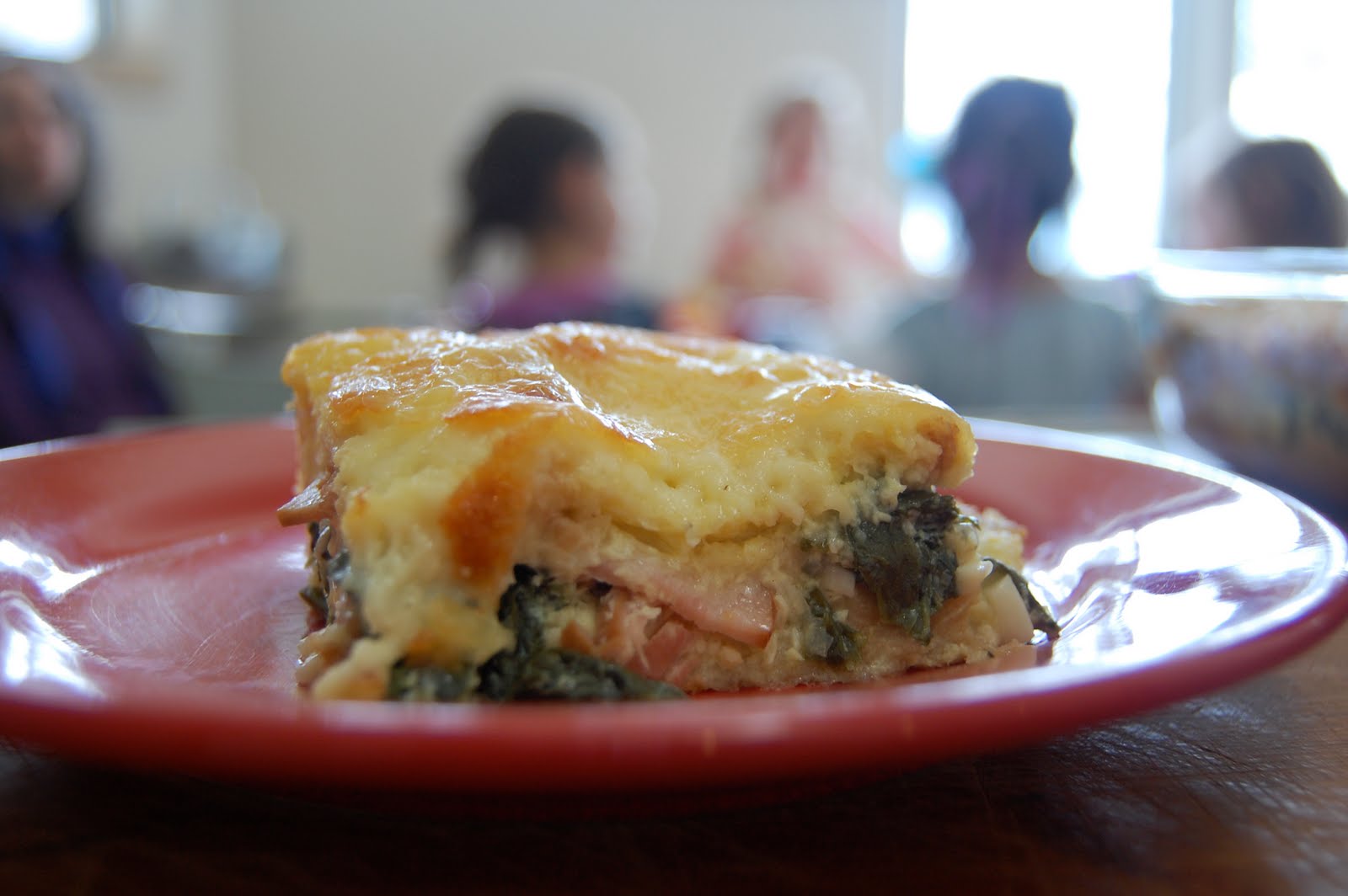 Why Brunch, you ask? Well, first of all, a strata must be prepared the night before it is eaten, so that it can really soak in all that egg-y goodness. All that needs to happen the morning of is out of the fridge, onto the counter, into the oven. Instead making a mess of your kitchen and losing your mind (maybe just me here?) before everyone comes over, you can set the table and sit there with your coffee while the strata merrily bakes away.

But that’s not even the best part. The best part (isn’t it always?) is the taste of the thing. Hearty and decadent, with a touch of green to make you pat your own back for being the kind of person who eats kale at breakfast. There is so much going on in here, you don’t need potatoes, and you certainly don’t need muffins or toast. To fill the plate, maybe a little fruit or a citrus-y salad. Coffee or tea depending on preference, mimosas if this is a booze before noon kind of crowd, and you are done.

Butter a 9×13 casserole dish, and line it with about half of the bread, fitting the pieces together like a puzzle. Combine the eggs, the milk, a pinch of salt and a few grinds of pepper. Whisk together until smooth and completely combined.
Heat the oil in a skillet over medium heat. Add the onion and cook until translucent. Add the thyme, garlic, and a bit of salt and pepper and cook for another minute. Add the kale and about a tablespoon of water. Cover and cook for a few minutes, stirring a couple of times. When the kale is tender, remove from heat.
Spread the kale mixture over the bread layer. Then lay the ham here and there. Sprinkle with half the cheese. Then make a layer with the rest of the bread. Pour the egg mixture over the whole thing, and then top with the rest of the cheese. Cover with plastic wrap, and use another pan to weight the whole thing down. Refrigerate overnight.
Take the strata out of the fridge about 1/2 hour before you are ready to bake it. Preheat the oven to 325 degrees. Bake for an hour, rotating the pan after 30 minutes. The strata should be puffed and golden, and very firm. Let sit for at least ten minutes before serving.