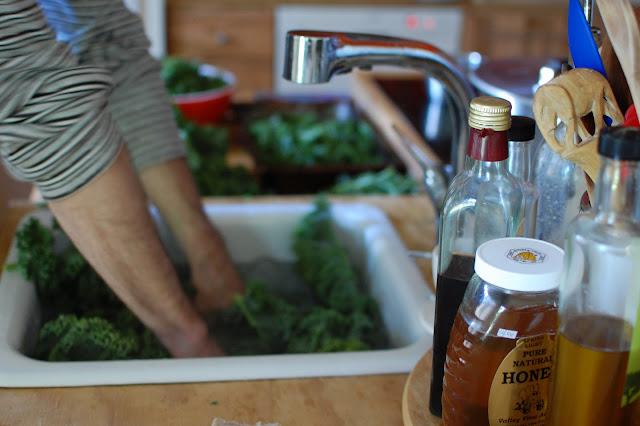 Six kale plants.
A six-pack of kale starts will run you about $2.50. Kick in a little more for a bag of compost and you’re on your way.
Those six plants can be packed into a tiny garden bed in the spring. Nurtured. Watered. Even sung to, if that is how you roll.
They will start to feed you by the end of May, in little fits and starts of delicate, baby kale. Any by July, you will have trees, a jungle of green leaves that grow faster than you can eat them.
But that’s not even the best part.
Because long after the rest of everything has frozen and withered away, there is the kale.
It is better after the frost, sweeter and worthy of eating it raw, even if you’re not the kind of person who does that kind of thing.
And, depending on the strength of the winter, the kale will feed you long after the world has bundled into its cold envelope, and you can trudge out through the deep snow to pick a few leaves for dinner. Even if it feels frozen, it will warm on the counter after a few minutes, perky and ready as it was in October. And after that? There has been extra all along, enough to freeze in little bags to get you through February, March, and April. Powerful stuff, this kale. 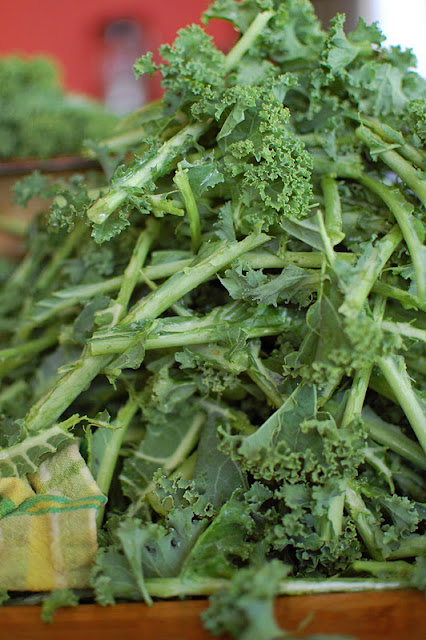 I’ve been thinking about revolution lately. A withered word in itself, I think, and sometimes I wish that I’d been there to make a difference in the decades before I was born, back when revolution was revolutionary. Back when there just seemed to be more conviction in the power of revolution.

A year and a half ago, when I decided to run for office in my little town, I was sick of feeling like I couldn’t make a difference. I felt fed up with apathy and anger, and I decided that I would strike out and do something I had never considered. I would participate.

I’m not sure that the experiment has entirely been a success. Most days when I walk out of meetings at town hall, I feel less empowered and more hopeless than I ever did before. I feel like there is such a divide between people and government, and I somehow I feel it more profoundly from this side, the government side. Local government and national government are different enough that it’s hard to make accurate comparisons, but in someways, I think the comparison is fair. And this divide between the people and government? It undermines democracy itself. If the people don’t participate, there really is no democracy. 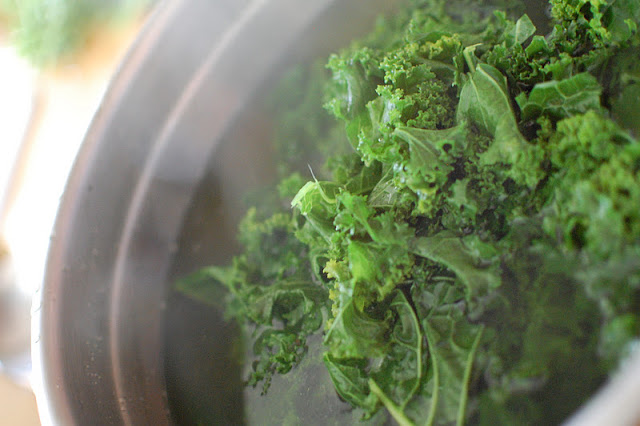 But I’m still plugging along. And I think, in the end, that participation really does create change. I think that the decision to be there, to go to a local town meeting, to run for office, to write to your representative, to stand on the street in New York or just your own home town and to say what you think–I think that each one of these actions strengthens democracy and (depending on how you feel about the present state of things) brings it back to life. 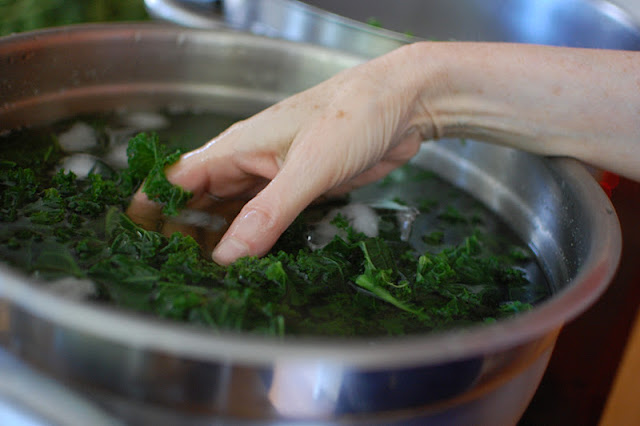 Which brings me back to kale.
Six plants. $2.50. If you’ve got a tiny bit of space and you’re thinking about turning it into food, I’d start there. And every time you take your food production into your own hands, you are participating. If you believe you can make change, it’s a self-fulfilling prophesy. 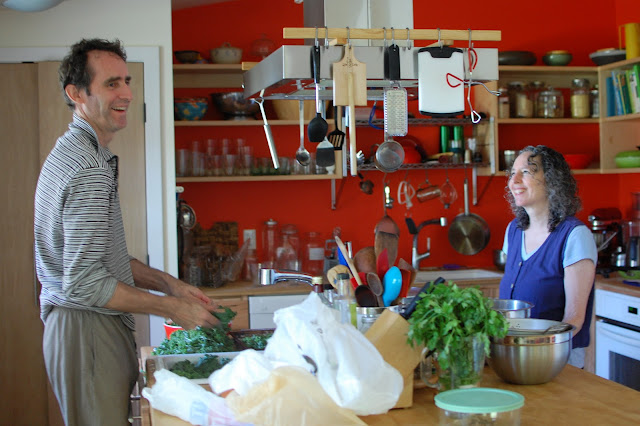 This is my mom, Jamie, and my stepfather, Chris. Last weekend, I was heading out for the day, and they offered to demonstrate (for you!) how to freeze kale.

They asked for a quick refresher on the method, and so before I left, we went through one batch. They put on some Steely Dan, and I took that as my cue to get out of the kitchen. 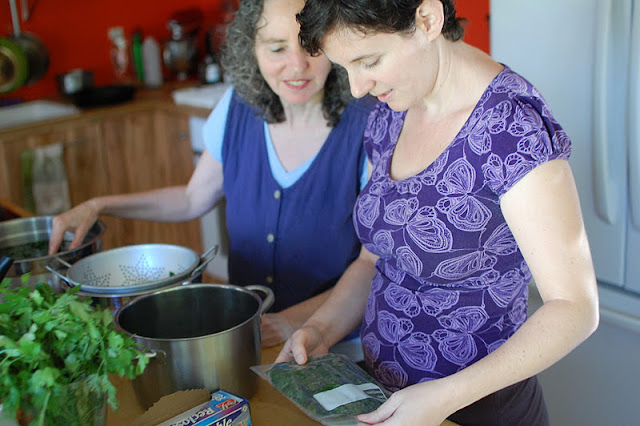 And so, (with thanks to Chris and Jamie for documenting the experience),

HOW TO FREEZE KALE
(or, revolutionary food preservation)

1. Soak the kale in the sink to remove dirt and bugs. 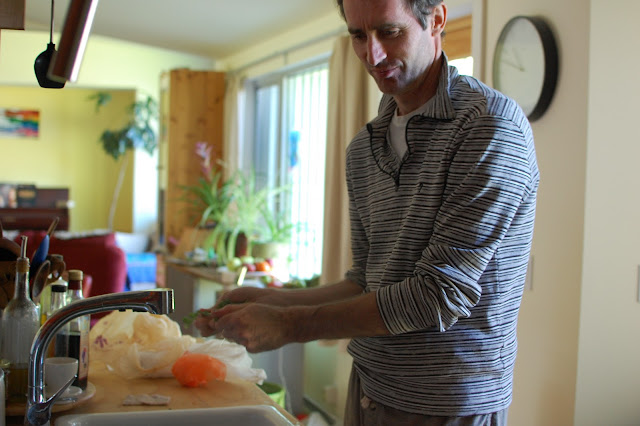 2. Take the leaves off the stem by holding the stem at the base and running your hand up the length of the stem. Chop the leaves roughly.
3. Bring a large pot of water to boil.  Set up a large bowl of ice water on the counter. Next to it, put a large colander inside a pot or bowl. 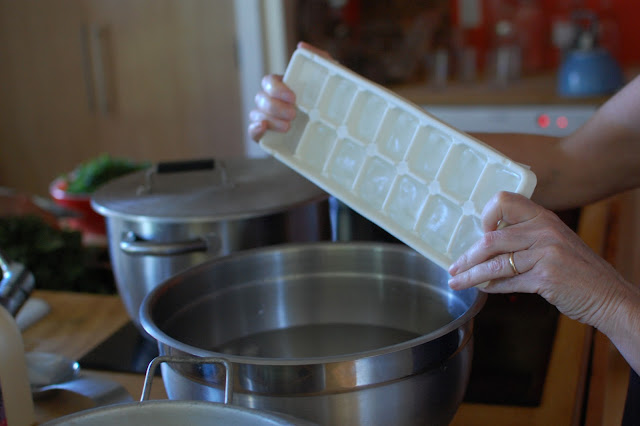 4. In batches suited to the size of your pot, submerge the kale in the boiling water for 30 seconds. 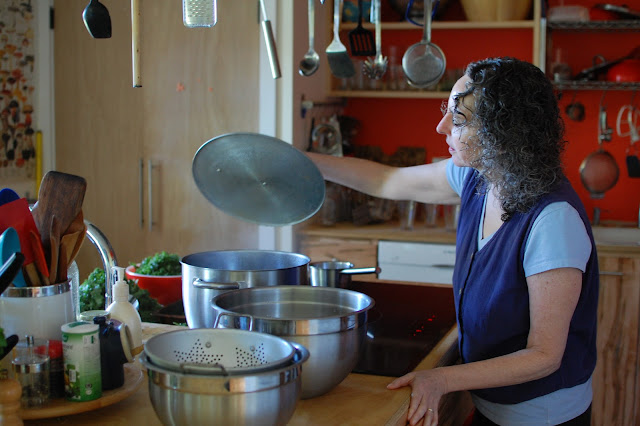 5. Use tongs or a slotted spoon to transfer the kale to the ice water. Keep it in there for a few minutes, or until it is fully cooled. Replenish the ice as you go, so that the water stays cold. 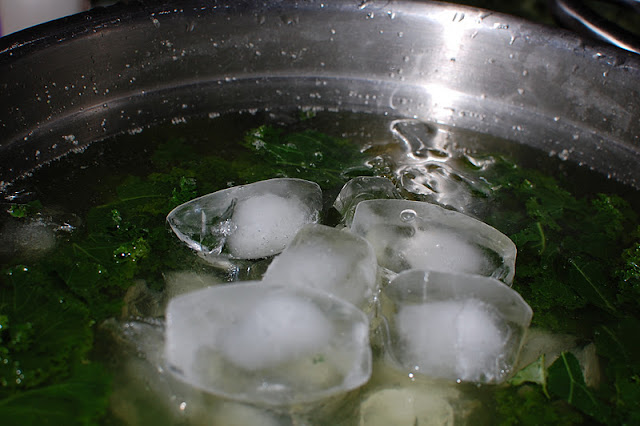 6. Then, transfer to the colander, gently squeezing the water out as you do so. 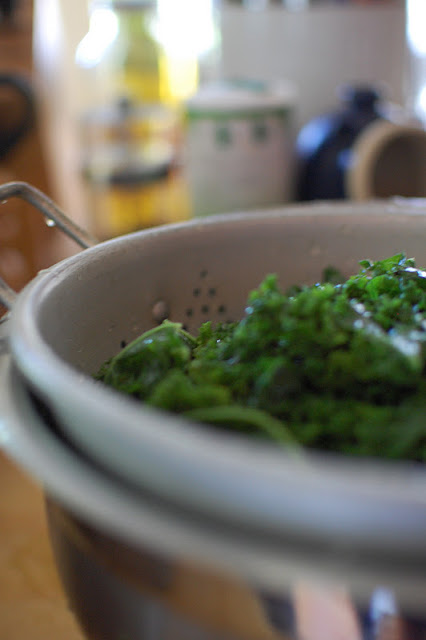 6. Transfer the kale to small freezer bags. Press the air out, seal, and flatten out the contents so they will stack nicely in the freezer. 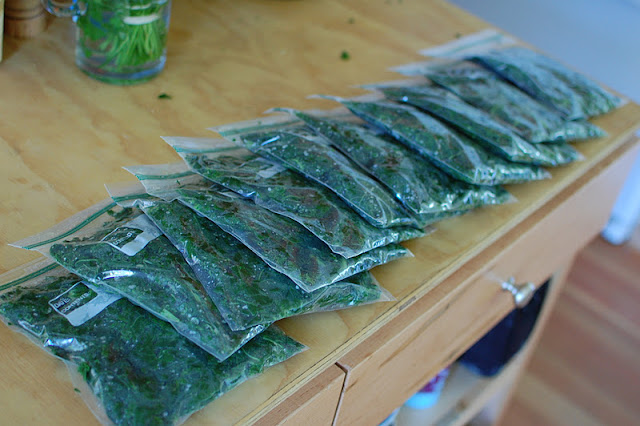 Use in soups all winter. You can defrost first, or just stick a kale-sicle in a pot of soup as it cooks.