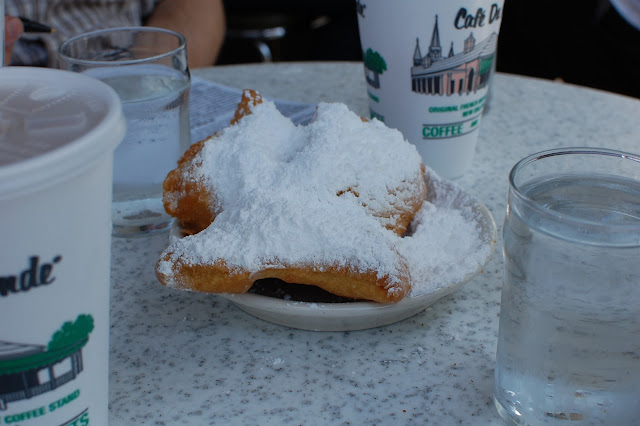 In the sense that there is a bit of Disneyworld in the French Quarter, I’d say that Cafe du Monde could be considered the food court. Right there in the middle of it all, there is most likely a line of sunburned and drunk/ hungover tourists extending down the street, waiting not so patiently for their tiny plot of land in vast expanse of powdered sugar covered tables under the open air pavilion of the Cafe du Monde.  I am conditioned to stay away from these sorts of places–I pride myself in being a traveler who searches out the real thing, who ducks the waving elbows of the tourists who stay firmly on the beaten path.
We were in New Orleans for exactly 54 hours, and over that time, we went to the Cafe du Monde 3 times.  So much for being that kind of traveler.
Because really, it’s a fabulous fabulous place.  When we arrived in New Orleans on Friday night after an entire afternoon of near misses (looks like you’ll be staying the night in Hartford… Oh wait, we’ll get you a seat on another airline… looks like you’ll be spending the night in North Carolina… oh, just kidding, the plane is working after all!), it was midnight, and we dropped our bags in the shower, checked the bed for bedbugs, and ran out into the night.  Joey led me directly to the Cafe du Monde, just a few blocks from the hotel.  Late as it was, there was no line, but nearly all the 200 or so tables were filled with revelers and whoever else, and we ordered two cafe au laits and 2 orders of beignets.  There are only a few choices to make as you slide into a table and brush the powdered sugar from the last customer off the table.
“Will you have your own order of beignets, or will you share?” (own!)
“Will you have your cafe au lait hot (small or large), or iced, or frozen?”  (hot, and small, as the small comes in a perfect ceramic coffee cup, and the large comes in a styrofoam cup)
That’s it.  That’s all you have to decide.

Then the hurried waiter or waitress in a paper hat will come, and your order and four other tables’ orders will be stacked on one tray, and it will be a magnificent pile of fried dough and milky coffee. And as the plates descend onto the table, they do so in a gentle flurry of powdered sugar that blankets the entire place, the entire neighborhood, even.

Joey first went to the Cafe du Monde with his grandmother when he was 14.  He has loved and searched out beignets ever since.  We made them at home with very little success a few years back, and every time we go to Portland, Maine, there is a stop for beignets.  But this, this is the home of the true thing, and as we arrived on that Friday night, he glowed through the haze of the powdered sugar mist with the joy of finally eating real, true beignets with me.  It was the best midnight snack I can ever remember. 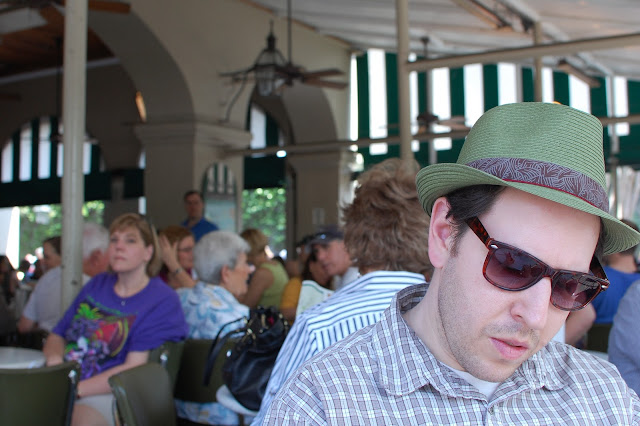 We were back again the next day, because we had to bring Alice.  We braved the lines, and the beignets were just as good in the middle of the afternoon.  Then the next morning, Joey’s birthday, we snuck out at 7:30 into the quiet city, and we ate beignets and drank milky chicory coffee for the third and final time.  Each time, the dough was fried to perfection, so light and crisp that it tasted only like pure loveliness.  When fried is fried right, it’s an entirely different animal, or donut, shall we say.  Because a beignet is donut, but better, more filled with joy and love and air.  It’s for coffee in the afternoon with a low cut dress so that the powdered sugar dusts the curve of the cleavage better than pressed powder ever could.  Which is why, I suppose, that I had no hope of recreating this at home, no hope of recreating it outside of the city even.
Some foods are better to stay in their safe places, so that I can yearn and wish to travel for them.  I miss tea in Turkey, but I know it’s there for me when I go back.  I miss coffee and sweet milky yogurt in Greece, and oranges in Morocco.  And beignets and cafe au lait, piled on a tray for someone else’s table shaken in a snow globe of powdered sugar.
« new orleans part 2: tonique and the pimm's cup
black bottom cupcakes, revised »