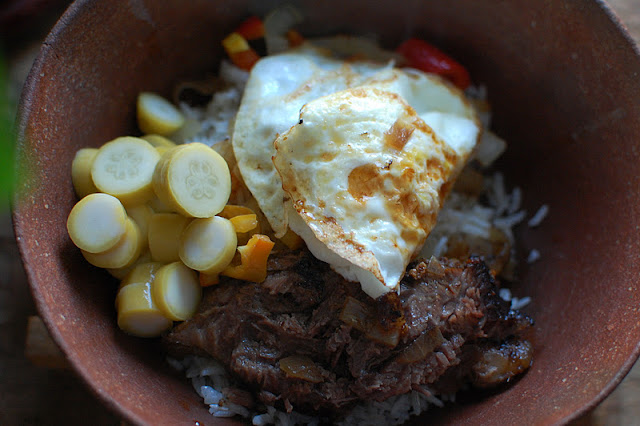 Well, sort of sisig.
This is the story.
Last week, on our final night in San Francisco, we went to eat at the food trucks at Fort Mason.  I know I’ve already told you this part, but I’ve got to set the stage.
This is my uncle, Gary. 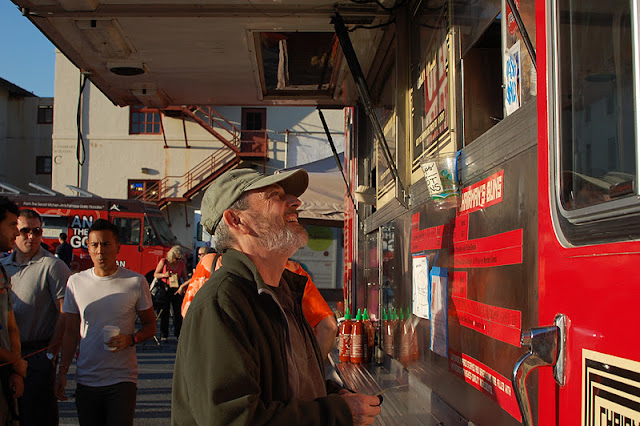 Gary was at the heart of why I was there with my mother, and why I traveled up to San Francisco after Naya and Oliver’s sweet wedding in Carmel. It was a fortifying sort of weekend that left me full of love and hope and good food. Joey went home after the wedding, and I met my mother in San Francisco. In the interest of time, and of getting to talking about that bowl up there, I won’t give you all the details, but I will tell you that we were there to do some work on a family rift (you know that rift that most families have in some shape or another? this would be ours), and that long ago, before the rift was so severe, it was Gary and his wife, Sondra, who taught me a whole lot of what I know about how to cook, and how to eat, and how to love food.

And so, on our last night in that full-bellied city, Gary took us to the food trucks. And as he admitted that he had been there several times that summer, we took his recommendations as to how to prioritize. With so many choices, we had to eat wisely in order to draw out the appetite. It was necessary to imagine with each choice that we were eating the very best thing there- the pork buns with pickled daikon (the best!), the fish tacos on homemade tortillas (also, the best!) and finally, the pumpkin and mushroom dumplings (again, the best!). But sitting in my little black folding chair in the middle of the parking lot, one truck kept catching my eye. 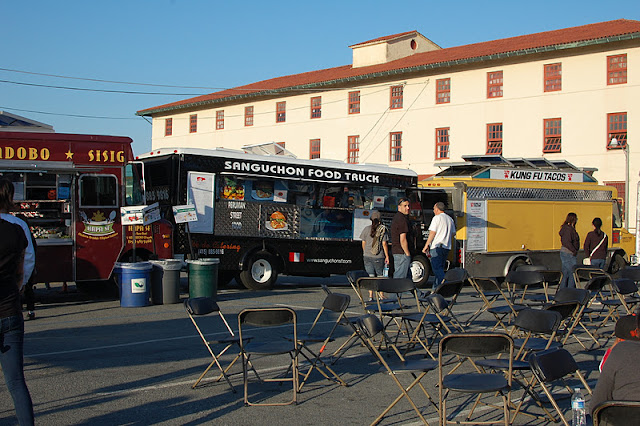 It’s the brown one there. And finally, at the end of it all, I asked Gary the question that had been humming in my all night.
“What, exactly, is Sisig?”
I take a fair amount of pride in knowing my road (and food truck!) categories, and this one was utterly new to me.
“Oh, it’s good!” he told me. “But you’ll never be able to fit it in your stomach now. It’s brisket over coconut rice with an egg on top.”
Yes. I know.
Brisket over coconut rice with an egg on top? Have you ever heard of anything so exciting? I thought (okay, I obsessed) over the combination as we packed up and made our way to the plane. I dreamed of it while I dozed over Kansas. I cursed the 2 feet of snow that fell within hours of our return- I cursed it because it prevented me from getting to the store to buy brisket so that I could create my own sisig NOW.
But then on Monday, I went to The Meat Market, our very own new and wonderful local butcher, and Jeremy gave me the brisket that would become my very own sisig. 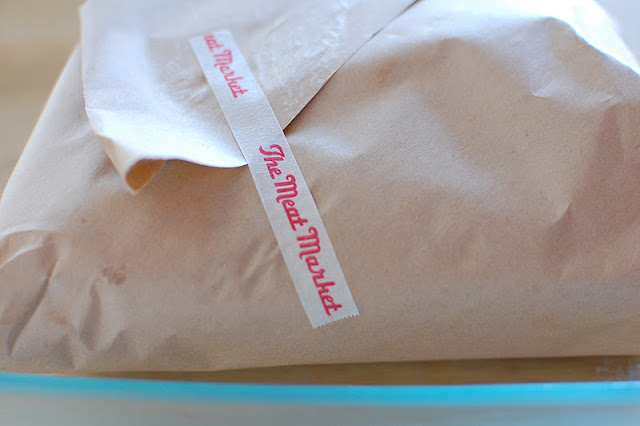 After I had the brisket safely in my possession, I did a little research to get more details on this new food. How should the brisket be spiced? Are there any other elements I need to include in there?

I went through at least 10 obscure and cloudy websites on Filipino food before I entirely believed it- there is no brisket or coconut rice involved in sisig. The main ingredient that I needed was actually pigs ears.

I have no pigs ears, although I know of a few places I could get some.

As far as I could tell, I needed some pigs ears and some chicken livers, and a really really hot plate. It would ideally sizzle together with peppers and onions and ginger and a the juice of a fruit called calamansi. Then I would eat it on a street corner in the Philippines with a cold beer, and that would be sisig. 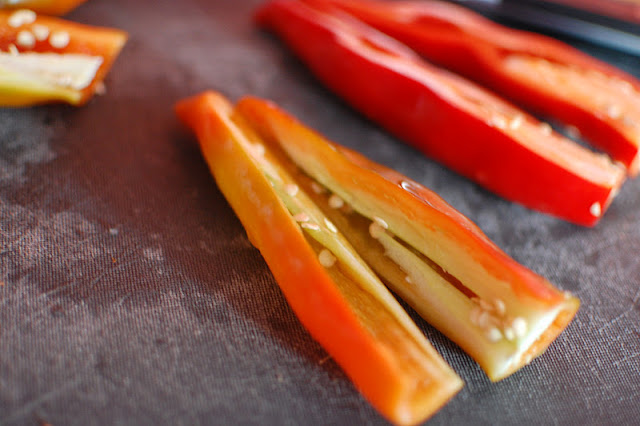 I don’t know if Gary had it wrong, or if the food truck was actually selling a version of sisig that the obscure cloudy Filipino food websites weren’t aware of. Either way, I had brisket, and I knew what I wanted.

Brisket over coconut rice with an egg on top.

I’m stubborn when it comes to cravings. 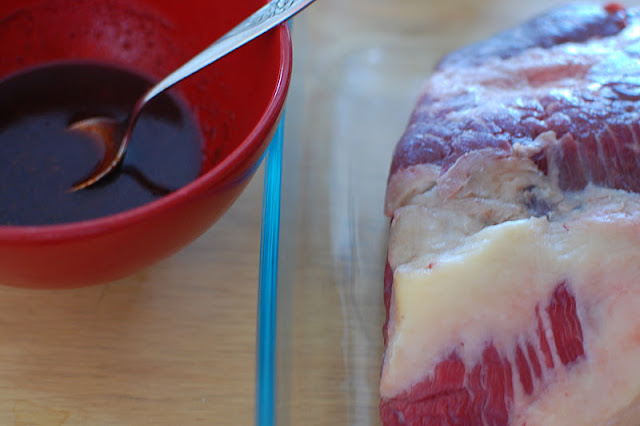 And so I’ll call it sisig, because that’s how it came about, but it’s really not quite. It is, however, really, really delicious.  It did not disappoint. And although it might look like a lot of steps, active time is pretty minimal. Very very worth it. 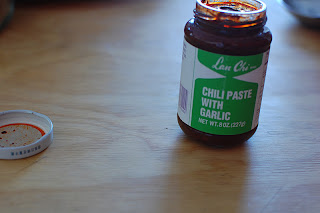 but if you don’t have it, combine about 1 tablespoon of chili powder with 2 cloves minced garlic, adding a drop of soy sauce and a bit of water to get a thick paste
1 red onion, minced
1 bottle dark beer
4 cups water or beef broth
1 dried d’arbol chile

For the final bowl:
2 tablespoons olive oil
2 cups chopped sweet peppers (add in a bit of hot peppers here too if you can)
1/2 onion, sliced
1 tablespoon grated ginger
salt and pepper
1 egg per person

Some sort of sliced pickle, for garnish

Make the brisket:
Preheat the oven to 250 degrees.
Combine the soy sauce, garlic, vinegar, sugar, salt, and chili paste in a small bowl. Rub the mixture over the brisket.  Heat the olive oil in a large skillet or roasting pan over medium high heat. Cook the brisket for a few minutes on each side so that a nice brown crust develops on the meat. Take the meat out of the pan and set it aside on a plate. Add the red onion, shuffle it around for a few minutes, and then pour the beer in the pan. It will bubble and sizzle- scrape all of the brown bits from cooking the brisket into the beer.  Put the brisket back into the pan. Add the water or stock, and tuck the chili pepper into the liquid. Cover the pan with a lid if it has one- otherwise cover it with tin foil.
Put the pan into the oven and forget about it for the better part of the day. Cook for at least 4 hours, but it could be 6 or 7 if that’s what works for you.

Make the coconut rice:
I did this in a rice cooker, but if you’re making it in a pot instead, you’ll need to increase the liquid. Essentially, you’ll need as much coconut milk as you usually use water when you cook white rice.
So- in the rice cooker, first melt the coconut oil in the rice cooker bowl. Add the rice, stir to coat it with the oil, and close the lid. Let it it cook for 5 minutes. Then add the coconut milk, dried coconut, water, and salt. Close the lid and set it for the regular cooking cycle.

Then, when the brisket and the rice are ready, finish it up!
Heat the olive oil in a skillet over medium high heat. Add the peppers, sliced onions, and grated ginger. Stir stir stir until it’s all shiny and starting to brown. Transfer the mixture into a bowl, keeping the pan hot. Add a bit more oil or butter if the pan needs it–then fry one egg per person.

Now the pickle- I leave this one up to you. Do you have a fridge pickle languishing in there from August? This is the moment. I had these beautiful pickled baby squash inspired by Marisa, and they were perfect. You can also make a quick carrot or daikon pickle- this one would be nice here too.

« eating off the grid
membrillo, or quince part one »