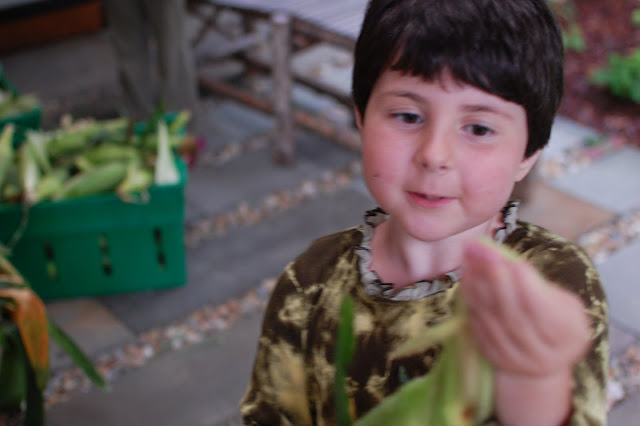 Joey was supposed to take the girls camping, and they’ve stuck around after all.  After changing his mind over and over for 24 hours, obsessively checking the weather on the internet in a fashion that rivaled my own, he put the tent back in the basement.  Up till the very end he thought perhaps they would rough it, he thought that a long stretch stuck in the tent next to the stormy ocean would be adventurous and somewhat thrilling, and then when the forecast turned to 100% rain mixed with the occasional thunder storm, he couldn’t lie to himself any longer. I’m relieved, because of course I love them, and I’m glad to have them home and all that. But really, honestly, I just don’t know how I would have shucked all this corn by myself. 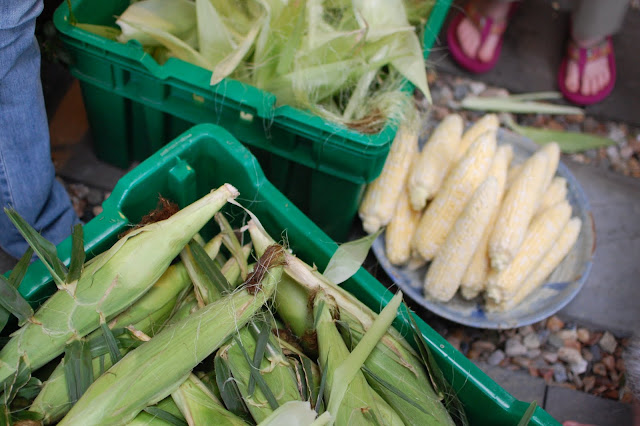 I had come into the lucky fortune of 80 ears of sweet corn, and my goal was to transform those guarded and husked pods of gold into freezer bags full of corn for the winter. Corn for burrito nights, for corn chowders and shepherds pies, corn for this dish that can perk us up on any February night. I was concerned that the girls would rebel, that they would take the exchange of camping with Daddy for corn husking with Mommy with sour disappointment, but they came through. 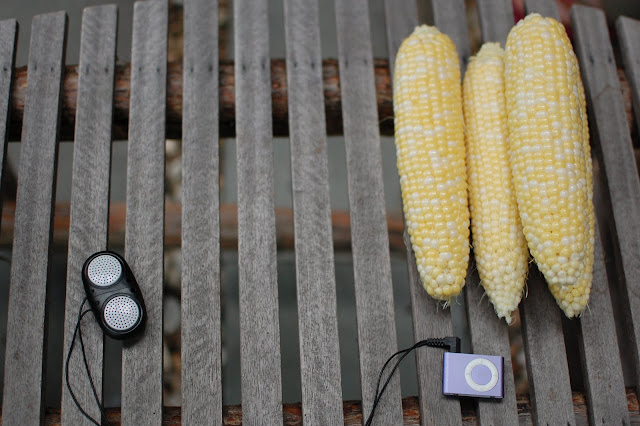 Rosie has recently inherited Maia’s little ipod shuffle, and Maia loaded it up for her with Lady Gaga and Abba and all the music that she asks for.  Joey found these tiny speakers at the dollar store, and now Rosie walks around most days with the speakers in her pocket, singing through the house, in the garden, or on the swing that hangs from the tree out front. She grabbed the iPod and found some Lady Gaga, and while the rain poured all around the perimeter of the roof over our front walkway, those tiny speakers boomed (okay, actually tinkled) with music. Sadie and Maia industriously husked while Rosie cheered them on by picking up ears of corn and using them like microphones, swinging her hips and belting out the lyrics. Occasionally, when prodded by the other girls, she would actually husk the corn, and then a new ear would become her microphone. 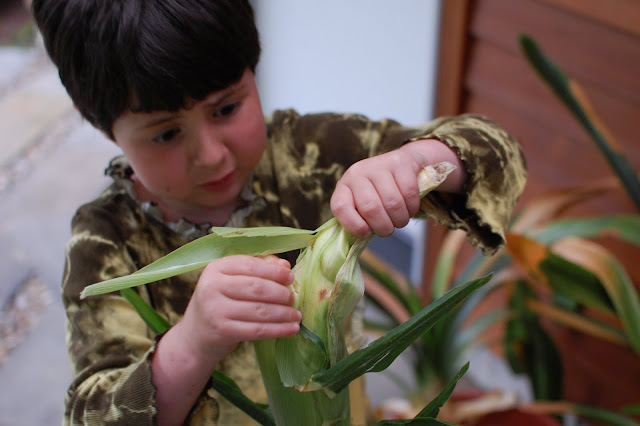 Inside, Joey was listening to Herbie Hancock. He had the big pot of water going on the stove, the little sink filled with ice water.  We had a system going, and I’d walk the husked corn in to the kitchen and put it in the steaming pot. Joey would transfer it to the ice, and then he shucked the corn. All along, I kept messing up my verbs, and he’d remind me: 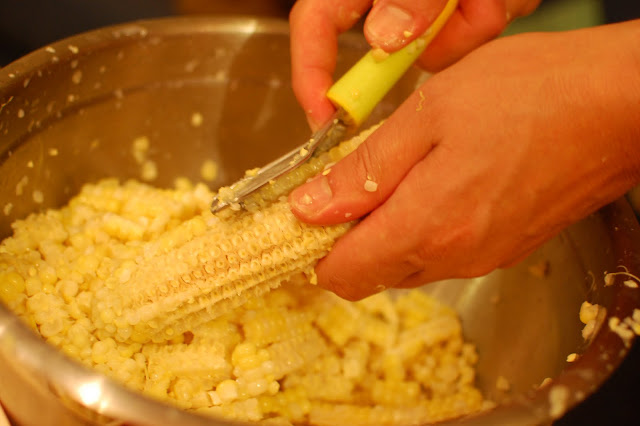 He used a little tool that I’d borrowed, an actual corn shucker. Pretty simple really, except that where a knife takes off most of the kernel and loses all that wonderful creamy juice, the shucker takes off the whole kernel. More corn. More cream. More delicious. 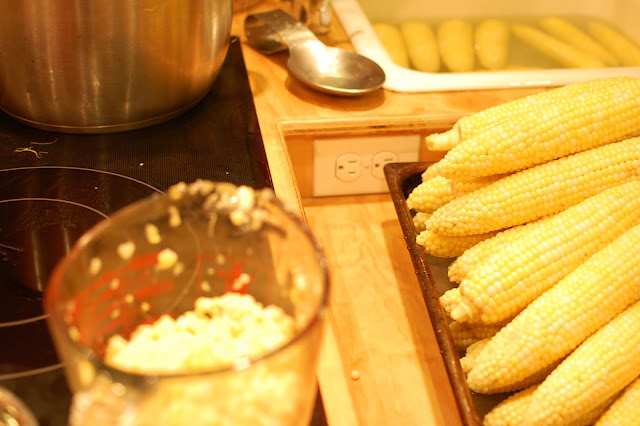 And so we worked like that, me going from Lady Gaga in the rain to Herbie Hancock in the steam. And when it was so dark outside that we couldn’t see the corn, it was time for bed. 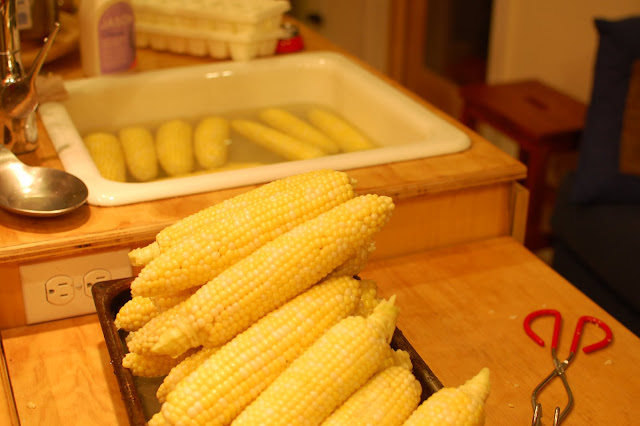 The girls each ate an ear of corn. Joey said he never wanted to see corn again. I filled the last freezer bag, and then we cleaned the corn off the floor.  I told the girls they would be rewarded for all their hard work with sweet corn through the winter.  They laughed at me, as if winter was just a story that I had made up. 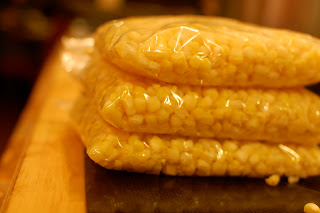 How To Freeze Corn

1. Husk the corn. Remove as much silk as you can.
2. Bring a large pot of water to boil. Prepare a sink or tub with ice water. Have extra ice ready.
3. Boil the corn for about 1 minute. Then transfer directly to the ice water. Keep the corn in the ice water for at least 5 minutes, replacing the ice as it melts. You want to chill the corn all the way through the cob.
4. Shuck the corn, using a shucker or a knife.
5. Transfer the corn to freezer bags in quantities that make sense to you. I ended up with several 2-cup bags (good for most recipes), as well as a few 6-cup bags (corn chowder).
6. Flatten out each bag and stack. Transfer to the freezer.