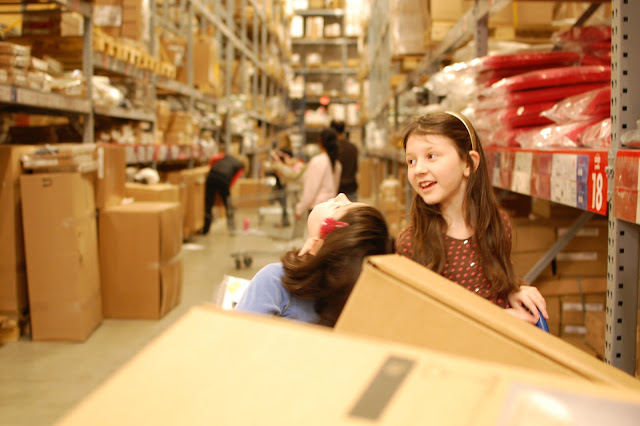 There have been several trips to Ikea in the last few months.  I’ll admit that I have had a passionate Italian sort of relationship with Ikea in the past, but I think I’m really done. 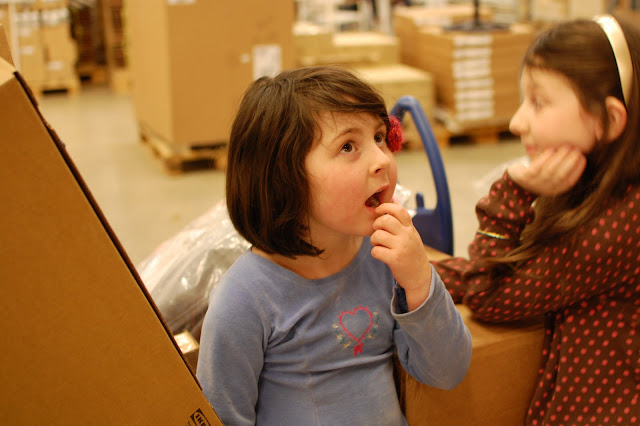 It’s not that Ikea is a bad thing, as far as those big companies go.  The whole Swedish thing earns them style points, and at least they don’t seem to be supporting political organizations that make me cringe.  I’ve never lived near to an Ikea, so it’s always held a glow for me, and when Joey and I walked into our first blue and yellow warehouse when we were on our honeymoon in Montreal over eight years ago, we were overcome with the possibility.  It seemed that with the right organizational tools, with the stuva and karlbad, we really could create a life where everything had its place, and we could do it for so little money.   I always have to ask how I’m paying for something so inexpensive if it’s not with money (child labor? horrible ownership?), but while all the other corporations around them show their colors, they stay pretty clean.  I’ve been to Ikea maybe 5 times since that first one, and every time I catch the bug, and I transform our bedroom with a kvass duvet cover or I find the perfect duktig basket for the girls doll clothes that are strewn all over the floor.  Retail and redecoration therapy all at once.

I have only one question.  What is that language? It’s not Swedish, is it? 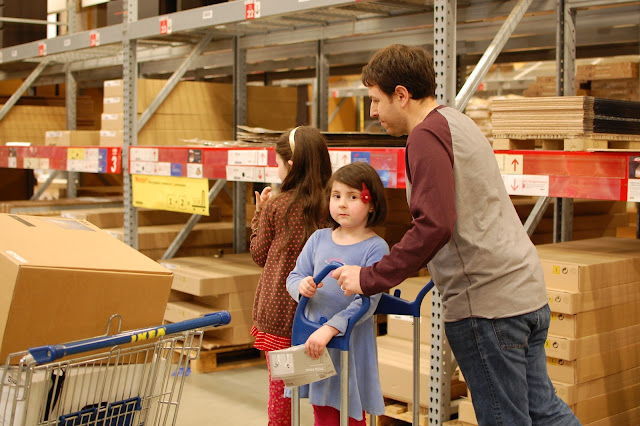 This last run of Ikea trips was brought on by our move into the part of the house that we’ll finally be settling into, and by my parents’ move into the house last month.  Between the two families, there has been a lot of stuff on the floor and nowhere to put it, and so we’ve been desperately constructing our ektorp and hemnes in the hope of creating places for everything to be.  The first trip was just Joey and my stepfather Chris and I, and we raced through the place like pros, pointing our fingers without deliberation with absolute surety and calm.  We packed two subarus, and out of money and time, we all ate frozen yogurt for dinner as we set off for the 2-hour drive home.
It all seemed so simple.  Except that for every piece we had acquired, we were missing some essential element, some shelf, fourth wall, or other item that we thought was included.  Chris set off on his own the next week to nobly complete the shopping list, which of course was missing a few more essential items.  Then this past weekend, Joey and I took the girls, and we headed down to New Haven to finish it once and for all. 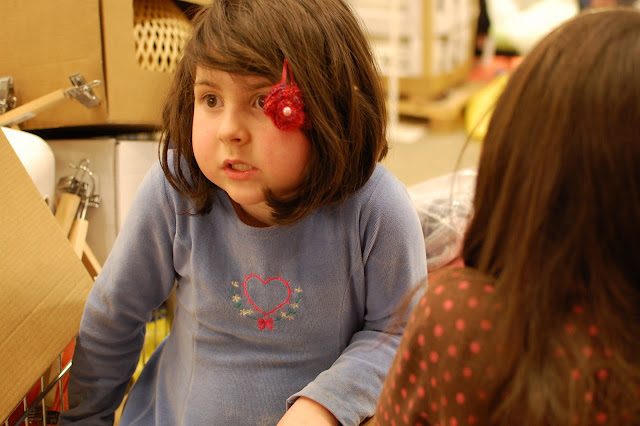 Now Ikea has the distinction of being simultaneously a wonderful and horrible place for children.  They were one of the first places to offer nursing rooms, there are always stools for children to wash their hands in the bathroom, and they even offer daycare.  But Ikea is bright and overwhelming and filled with pink and green particle board, and those aspects alone make it a prime area for supreme kid meltdowns in any given corner of any given store.
We did okay.  By the end of the day I had a full blown cold, and Joey almost ran Rosie over with an oversized cart.  The girls each had a hot dog, and, tucked in between the hovas and the tulsta, they clung to their mysteriously inexpensive stuffed toys that we had offered to placate any meltdowns, and we headed home.  Done with Ikea.
I have to say that the one who stayed the most chipper through the whole affair was Joey.  He didn’t flinch at the thought of all of the furniture that he’d have to build that night,  and even when went through the credit card line when we meant to go through the cash line, and when we had to pack up the entire cart again and go through checkout a second time, he kept a smile on his face.
I blame it on the apizza that he had ingested just a few hours earlier. 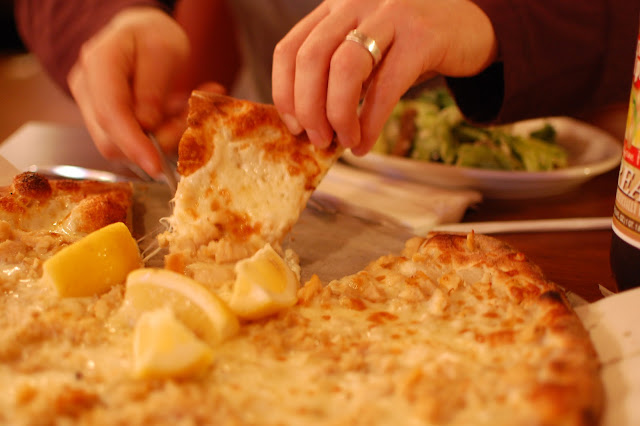 Through these many trips to the New Haven Ikea, there has been one missing element.  Whether it is time or some other unforseen circumstance, we never seem to get into New Haven for pizza.
Do you know about New Haven and pizza? 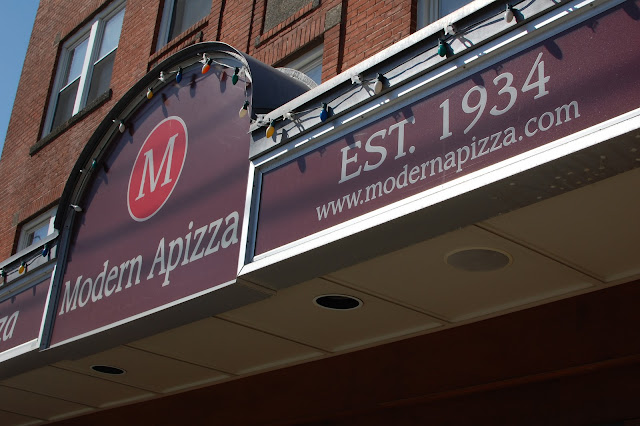 Connecticut as a whole has a pretty big thing about pizza.  I dated someone from West Hartford, CT way back, and he used to take me to Lena’s, where they claimed that they had invented pizza.
I know, what about Italy?  What about New York?  Chicago?  Hell no.  Connecticut defends their pizza history with all that they have.
New Haven has a special kind of pizza, something they call apizza.  As far as I can tell, the distinguishing factor is the crust, which is thin and sometimes black with the heat.  Mozzarella is not a given–it has to be ordered. And the real specialty is white clam pizza. 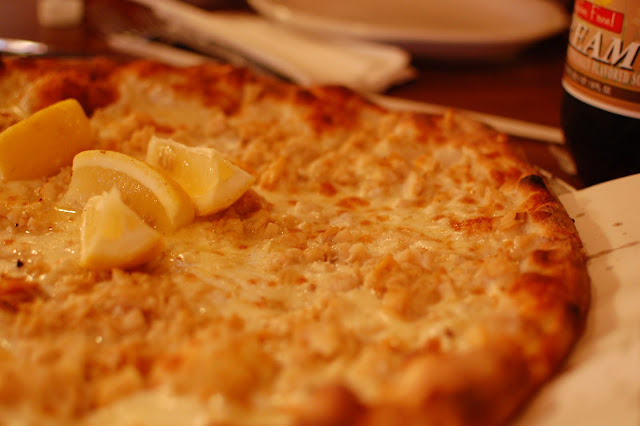 No sauce.  Just cheese, clams, and lemon.  The girls were not fans. 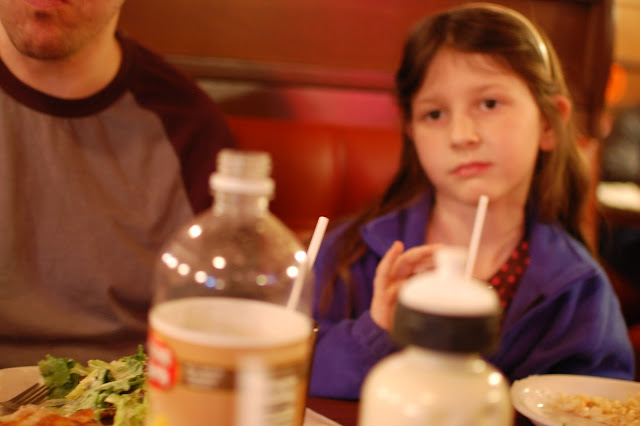 If you drive through New Haven, you’ll notice that there is a pizza place on every corner.  But a few have particular notoriety.  Pepe’s is the most famous, and I’ve heard you should plan on waiting at least an hour for a table and another hour for your pizza.  Sally’s has a pretty rabid following too, but again, the lines.  But I’d heard about Modern, and the rumor was that the pizza was as good (or almost) as Pepe’s, but without the time commitment.
I’ve never been to Pepe’s, but the pizza at Modern was fantastic.
The combination sounds wrong, I know, but it’s not. Because it’s unexpected, you actually get to discover it when you bite into it.  crust. cheese. clams. lemon.
Did they really invent pizza in Connecticut?  It all depends what you mean by invent.  crust. cheese. clams. lemon.  Sounds original to me.

Next time I’ll try Pepe’s.  But as I’m done with Ikea, I’ll have to go to New Haven just for the pizza.

And I will.  Because watching Joey analyze that crust was worth the drive.
I’m starting to think that Joey and I should have written something about roadfood into our wedding vows.  Like “I will always stop at that little dive that we are driving by, no matter what. I will always stop, because to discover that new and perfect bite makes you happy.”  I would have said it to him, and he would nod and glow with joy, and he would say it to me, and I would do the same.
« white bean soup with garlic, kale, and sausage
new orleans »