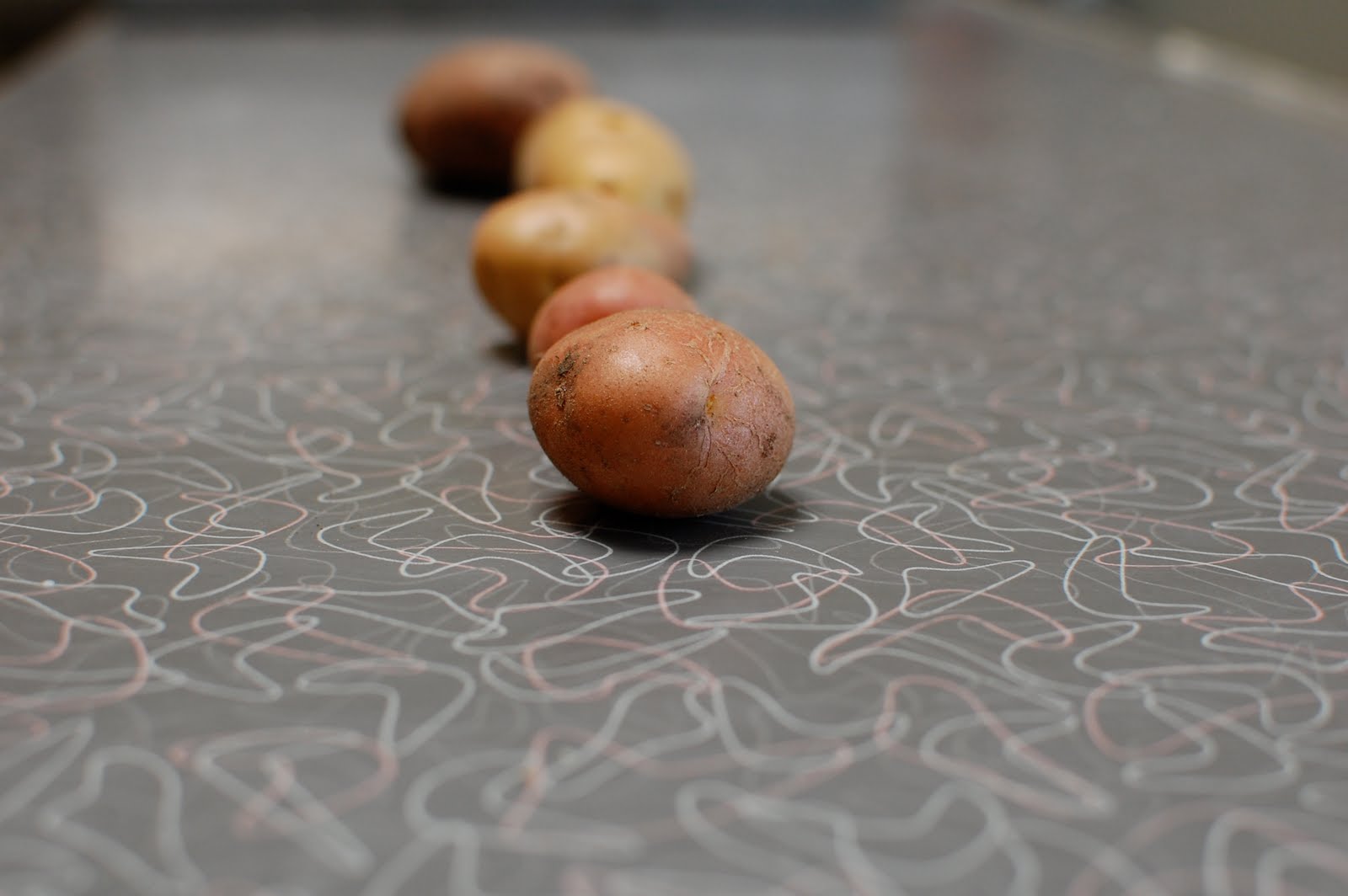 I am an entirely incompetent gardener.
I think I’ll get better, someday. Until then, I sort of like being bad at it. It makes me feel like life is long and there is so much room for improvement. With all the food I produce as a bad gardener, I can’t even imagine what a superhero I’ll be in thirty years.
I’m surrounded by people who know exactly what their doing–I mean they really know. My friends Al and Elizabeth who run Indian Line Farm, one the the first CSA’s in the country. My friends Jen and Pete of Woven Roots Farm which is beginning to produce vegetables four seasons a year. There’s Naomi who’s garden is one of those wonderlands you just want to move in to. I’ve got it on all sides, and everyone is happy to share their knowledge, their seeds, their bionic vegetable starts. I’ve got no excuse for being such a bad gardener.

So what’s my problem?

Well, no matter how many lovely notebooks I have, no matter how determined I am to change my ways, my garden is, well, I’ll say–painted with rough and sweeping brushstrokes. In February, I think through the whole season, I make drawings of all my possible successive plantings, but the reality is, once I have something in my hand, I just can’t help but put it in the ground, no matter what my plan is. Last year, Jen brought me a few trays of cabbage starts that she had left over, figuring I would plant what I wanted and compost the rest. But I just couldn’t compost those beautiful little plants. And that’s how I ended up with forty cabbages.

This year, it was potatoes.
It didn’t seem like I ordered that many seed potatoes from Fedco. It was my first year growing potatoes, and I wanted a little variety. It all seemed perfectly reasonable.

Do you know how potatoes grow? They grow from other potatoes, potatoes that have been cut up so that each piece has an eye from which a new potato plant might sprout. And so I cut each potato that came out of my Fedco box into a few pieces, I left them in a sunny window to get started with the sprouting process, and then I went to plant those little potato chunks in my garden.

They filled up almost the whole thing.

There was a little space for carrots, a small bed for onions and a corner for one cherry tomato plant. The rest? Potatoes.

I could have stopped- composted some of those seed potatoes, given them to a friend, anything! But no, the bad gardener in me had to plant every single one of those little potato sections.

Now if you’ve ever grown potatoes, then you know just what happened next. But I can tell you that I was fascinated and shocked by the activity of those little potato sprouts. What happened next? They grew into a jungle. A jungle of strange and dangerous looking tomato-y type plants. I was told to mound around them as they grew, and so every week, I mounded. I mounded until I was bringing in dirt from other parts of the yard, and until there were deep troughs between the plants. My neighbor said, mound! mound more! Your potatoes will be green and then they will be poisonous! I mounded more.

Then, there was fruit on the plants. Hundreds of little hard green tomato like fruit. I gave a visiting friend a tour of the potato jungle. “What is that?” I asked. “Can I eat it?”

“Only if you want to die a horrible death.”

I mounded more. I stayed far away from the scary green fruit.

One day, I stuck my hand into the ground, and I pulled out a potato. It was barely connected to anything- it was just there in the ground. For each spindly plant there was a gaggle of potatoes scattered in the earth below, whole, perfect potatoes. I showed that first one to Joey and he gave it a look I hadn’t seen since Rosie was born. “Our…potato?”

From that day on, he dug potatoes almost every day, just to dig them. I pleaded with him to let them mature, to wait until it was time to harvest, but in the end, he was a little boy in a candy shop. I couldn’t deny him the pleasure. Whenever we had a guest, Joey would pull them by the hand, and they would dig together. He got glowy even when he just talked about digging potatoes.

When the plants died and it was time to harvest, I think we had already eaten half the potatoes. I was secretly relieved, because I really didn’t know how we would store all those hundreds of potatoes. I had asked everyone I knew, and I had gotten all sorts of answers.

“Dig a hole in the ground. Shovel a path out to the hole in the winter.” (nope)
“Fill buckets with sand. Keep the buckets in your basement. Make sure the temperature doesn’t go above 50 degrees.” (nope. basement’s too warm)
“Dig a root cellar! Don’t you want one anyway?” (Absolutely! Would you like to come and build it for me?)

And so, in the closet under the stairs, there is a Ball Jar box. In the box, you will find our potatoes. 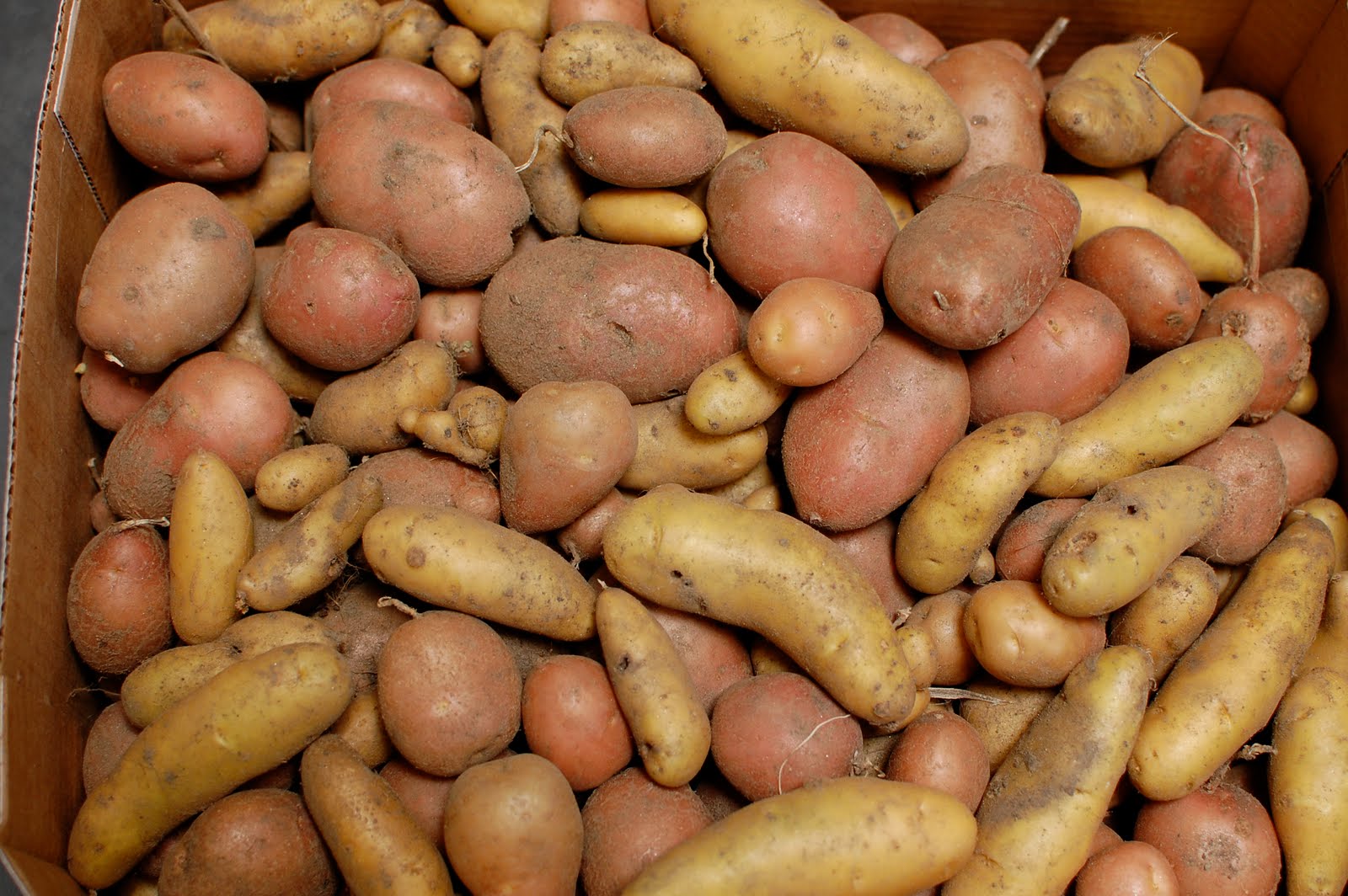 They are only slightly forgotten. We tuck into the closet and caress their lovely skin, and here and there, we eat them. They are fantastic and delicious potatoes. But I must say, after this season of our great potato invasion, they are still mysterious. The forbidden fruit, the randomly placed earthbound potato–this is no summer lettuce mix.

Next year, the potatoes will come again. But I’ll plant one bed, and then I’ll share the rest of my seed potatoes with you.

Even as the cool wind blows in, we are still celebrating the summer. And yes, it’s potato week! Our potatoes have found themselves in so many clothes this summer. There have been a regular batch of Greek Island Potatoes, of course, and then there was that hash. As the leeks have come in, they’ve been kissing the potatoes in potato leek soup, and there has been a potato salad or two. I’ve been dreaming about potatoes with horseradish and cream, and the season’s coming around to beef stew time again. I think that potato box will be empty, soon enough.

And you? What are your potatoes wearing this week? Just to get your inspiration going, let’s see what the crew is cooking…

Healthy Eats: A Day of Potatoes: Spuds for Breakfast, Lunch and Dinner

Nicole at Pinch My Salt: Taquitos de Papa, made with leftover mashed potatoes

Paige at The Sister Project: French Fries to soothe a burnt-out cook’s soul

Margaret at A Way to Garden: Potato Growing, Curing and Storage Tips

« fried chickpeas with sage
green chiles, and a giveaway! (exactly what you want) »