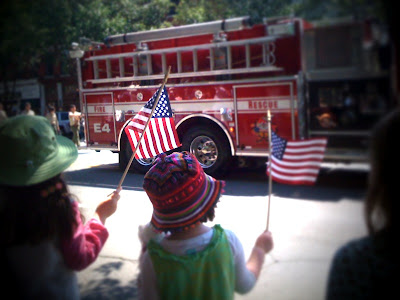 Yesterday I was visiting a friend who was home for a few days to celebrate the swearing in of her parents as American citizens. They have lived here for 40 years, but for many reasons, they have finally decided to make the relationship official.

“We’ve been living together along time,” her mom said. “It’s time to get married.”
I’ve been thinking a lot about patriotism lately, and about what I’m passing on the the girls. I was raised to look on the flag with little respect, and to roll my eyes at the the star spangled banner. We were a family of activists and revolutionaries and cynics. There was a lot of threat of “I’m moving to Canada.” when I was growing up.
But things have shifted since then. Many aspects have contributed to that shift, but last year’s election certainly helped around here. My own decision to participate in the system this year has changed the game as well. But really, I’ve got to say it’s the girls. Honestly, I don’t want to teach them to be cynical about anything. Realistic, yes, but cynical, no. And that’s hard for a cynic me. So, I’ve been thinking about the patriotism that really engages me. And that’s what I talk about with them. This one has been a challenge though–when it comes to God, death and America, the girls want answers and they can tell if I’m faking it.
So on this day of celebration, and of independence, and of thoughtful rebellion, I wish you a day of clear answers for your children, and of cold beer and potato salad.
Happy fourth, to those of you in these parts of the world.
« june pickles
gooseberry fool »