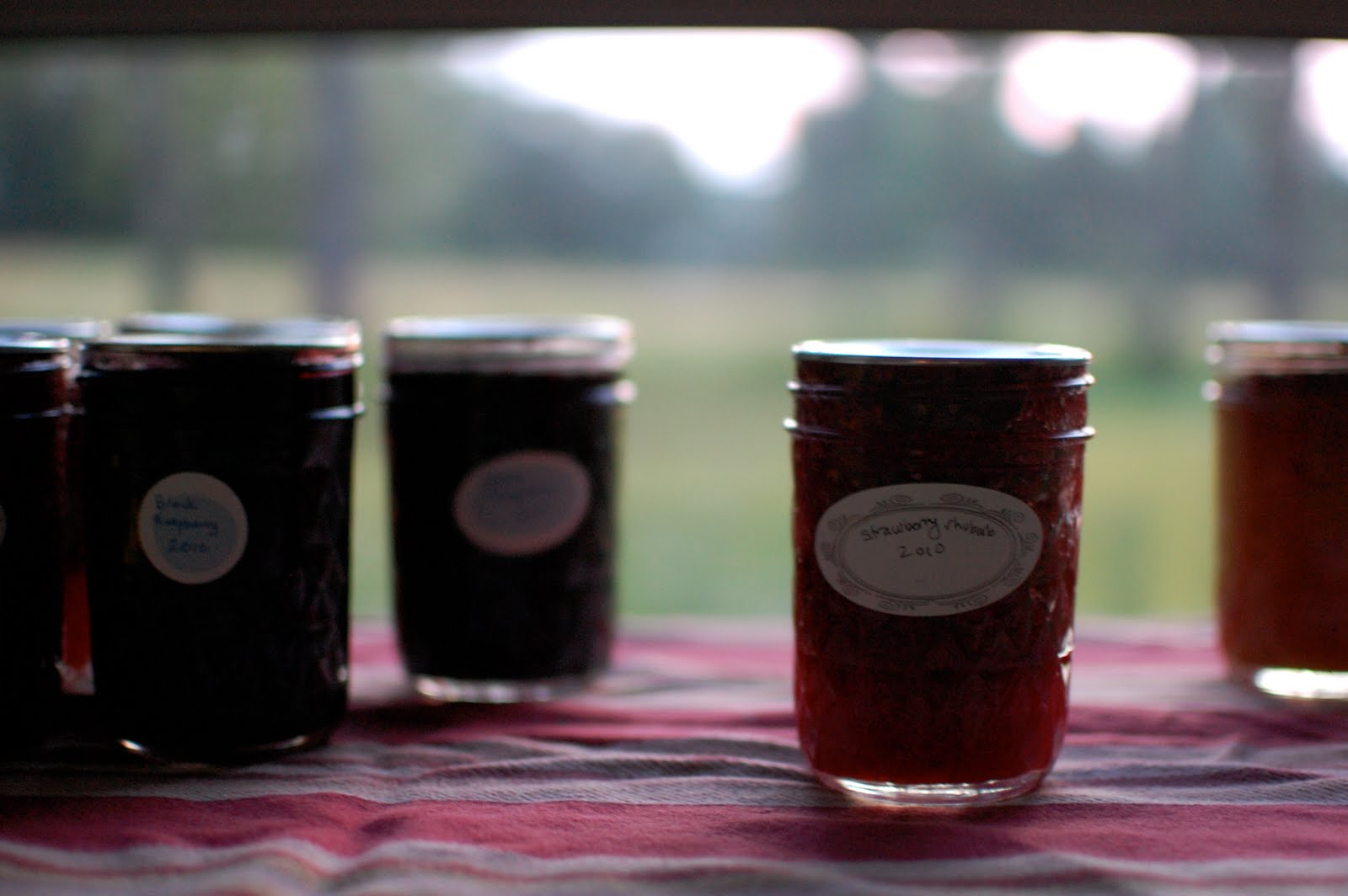 I have often spoken about canning as an activity that should be done with others, and I still hold to that. Especially when there is too much fruit to handle, and when the number of jars to fill is so high that you find that every surface in the kitchen is covered with motley mason jars, extra hands to hull strawberries or pit cherries can be the difference between tears and utter satisfaction. But there is another reason why canning with friends is a good idea, especially in your first few years of it all.
I’m talking about reassurance.
Once upon a time (yes, here I go again idealizing bygone days- don’t roll your eyes at me young lady!), canning was how people made sure that they had food for the winter. Everyone knew how to do it. But (and watch me oversimplify the century here) as the grocery store became the place where food comes from, something shifted. Sure, food procurement became a whole lot more convenient when we no longer had to pick the berries, cook them down with sugar, and can them ourselves. But as we didn’t have to do any more, we stopped learning how. And, oddly enough, we became afraid of it.
Food safety is something to be taken seriously–don’t get me wrong on that one. I will however, add a footnote to anything alarmist your have ever been told about canning at home:
Common sense will keep you safe.
Follow the simple rules. Use clean equipment. If it smells wrong or has something growing in it, don’t eat it. If the top doesn’t pop, refrigerate it and eat it sooner. Honestly, it will be okay.

So, today, in place or in addition to a friend to hang out with you while you are making your first batch of jam, a few simple guidelines… (feel free to jump in with more)

Before we begin, one piece of advice. Start small. Don’t try to make more than 8 or 10 jars of jam at once. Trust me on this one. The first time I made jam, I made 45 jars of blueberry jam. I thought canning was the circle of hell that Dante forgot. Quantity was my mistake. I made it so that you don’t have to.

Equipment:
You will need a canning set. These are cheap new, and cheaper from tag sales where they tend to be plentiful. A canning set consists of a large pot and a rack for the jars. You will also need a jar lifter, which you will probably use upside down a few times before you figure out why your jars are slipping out of it. You would also be quite happy to have a little tool that I am on a search for, a magnetic jar top grabber. If you find one of those, buy two, and then you don’t have to decide what to get me for my birthday.

You also need jars. You can buy them from the hardware store, you can search through the nooks of the world for antique and perfect jars, or you can order fancy ones on the internet. It’s entirely up to you, as is the size. I tend to do jam in pint or half pint jars, and applesauce and pickles in quart jars.

You need lids and lid bands. Although the jars can and should be reused, the lids should be new, although I have been known to break this rule in an 11 pm panic. You can find a box of lids and lid bands at the hardware store for next to nothing, or if you buy jars, they will come with lids.

You will need two pots in addition to your canning pot: one to make the jam and one to boil the lids. You will need a canning funnel, which is wider than a regular funnel. A pair of metal tongs will help you out, as will a liquid measuring cup for pouring jam into jars.

Most jams need some pectin, and I favor Pamona’s. It even comes with a handy little piece of paper with recipes, and these are the basis for the jam made by most people I know. You will need sugar, and maybe some lemon, and that is all.

It will always take longer than you think to boil all the water in your canning pot, so get that going first. When it is boiling, sterilize your jars. You can do this by tossing them in the boiling water for 10 minutes or you can run them in an extra hot dishwasher. Make sure that after you sterilize them, you don’t touch the rim. Dip your jar lifter in the boiling water for a minute to sterilize it, and then use it to take the jars out of the boiling water. Put them on the counter close to the stove.
In the mean time, make your jam. Depending on what kind you’re making, the recipe will shift a bit, but it won’t take long to cook.
In a separate pot, boil your lids and bands. You can leave them in there until you are ready to use them.
Using your canning funnel, fill the sterilized jars with hot jam. Leave 1/2 inch of space from the top. Use a paper towel or clean rag to wipe excess jam off the jars.
Using metal tongs or your handy jar top magnet, take the lids out of the water and place one on each jar. Screw a band on as well, only about half as tight as you would normally close it. Place the jars into the rack, and lower it in to the hot water. You can probably fit 7 or 8 jars into your rack. Let the water come back to a boil, and from the moment, start timing. Most jams require 5 minutes of processing, but other recipes will have different times. When the time is up, remove the jars from the water. Put them on the counter and don’t move them. Just perk up your ears and listen.
You will probably hear some jars pop right away. It is an incredibly satisfying sound. Some will take as many as 24 hours. If any have not popped in 24 hours, put them in the fridge and use them first. After 24 hours of sitting, you can move your jars. Check them all for depressed lids (that’s what you want). Remove the bands from the jars. Using a wet cloth, wipe off any jam that has congealed on the outside of the jar. You can store the jar without the band, and save them for when you actually open the jar.

And that’s really all. If you have a few quarts of berries, you can whip up a nice little shelf of jam in an hour or so. But with more? Invite friends, or me, or start a conversation with the other person buying jars at the store and try to combine forces. But trust me on this one, after a few batches, canning will just be something that you do. You won’t look at the jars on your counter wondering if there is botulism inside, and you’ll be able to go through the process without looking at the directions. Amazing how things just become something that you do, don’t you think? I love that.

Did I leave anything out? Anyone have canning secrets to share? Let’s just call this the section of the hardware store with the jars and lids–the best place to make a friend in my experience. Jump in!