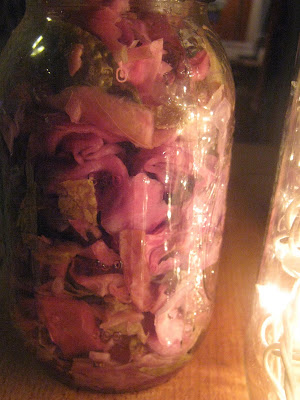 Yes, I’m still in Maine, and feeling pretty dreamy about the whole thing. We’ve just been eating a lot vacation food, and spending good time with Sarah and Jefferson, and loving this city. Last night I got to drop by a book signing for this book by Amanda Soule, although I was pretty shy and nerdy, it was a treat to meet such a woman. The other night, we ate ten lobsters, and last night Joey and I saw this movie, which was good because it was made for a focus group of my peers, I think, which felt a little creepy. But a movie at 9:45, that’s a vacation.
But I know you keep asking about the kraut, and I’m going to slip out of the dream for a minute to revisit the experience, which, I think, will be the first of many. Not necessarily because I made amazing kraut, but because I learned a lot and am eager to give it another try. It’s totally edible, but too salty, I think, and could have done its thing for a bit longer. But let me get to it- this is what happened.
I grew a lot of cabbage this year. When Jen showed up with a million cabbage starts in April, how could I say no? So kraut seemed like a viable future for us. A few weeks ago, the Northampton contingent came over and we chopped cabbage while the kids made chaos.
Note 1: Next time, I will grate the cabbage. It should be thinner.
We used three types of cabbage, red, a cool conical early green, and savoy.
Note 2: Next time, I will not use savoy. It didn’t hold up to the others.
I drew my directions from here and then more helpfully here. Basically, in two huge pots, we put a two inch layer of cabbage. Then two tablespoons of kosher salt. Then use a potato masher and bruise the cabbage as much as you can.
Note 3: Although the directions said that you need two tablespoons of salt to make the kraut do its thing, it was too salty! Next time I will play with the salt to see if I can use less.
Then we made more layers in the same way. Cabbage, salt, bruise, cabbage, salt bruise. When we came to end of the cabbage supply (I thought it would never happen), I put a plate in the pot that just fit in it, and weighted it down with a jug filled with water. This was my set up. 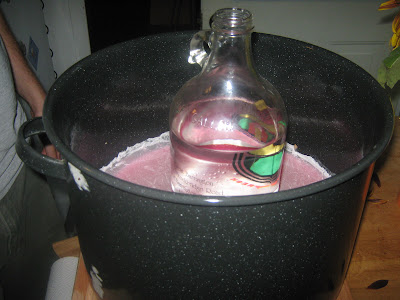 Then I covered it with a towel and put it in a cool place. On the second day, I was instructed to check it and make sure that it was generating some liquid. It was dry as a bone. So I added a bit of salted water.
By the third day if not sooner, the kraut is supposed to be entirely under the brine that it has magically self created. Mine still needed a bit of help. So, filled with anxiety that I had already screwed it up and it was going to be a moldy mess, I added more salt water.
Note 4: I would have made sure it was covered with liquid earlier, like by the end of the first 24 hours as some instructions say. Once it was covered, it really started cooking.
By the fourth day, it was covered with, shall we say, activity. This is totally part of the process, and you have to let your nose be your guide here. If it smells like rotten cabbage, throw it out. If it smells like kraut, you’re on to something. But the surface should look something like this. 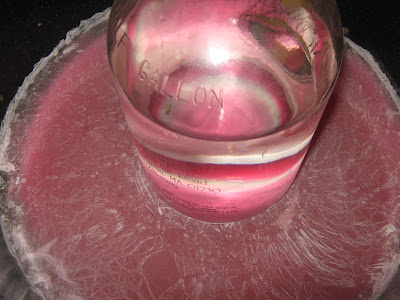 From here on, you’re going to want to skim off this stuff every day. Be gentle with it, you know how a living and breathing animal in your kitchen. Exciting, isn’t it?
A word here about fermentation. I was conceived shortly after my mother left a macrobiotic cult. I was raised on ume plum paste and brown rice- let’s just say my blood might have a bit of fermentation to it. But for those of you who are fermentation virgins, don’t be afraid. I know it’s scary, but it’s good for you! Although sometime I’ll tell you about the terrifying lecture that I heard from the head of this organization, they put out a lot of great information on the benefits of fermentation.
The kraut should be done in 7 to 10 days or so. Taste it to see. I stopped mine a bit short of when it was ready because I was off to Maine. It’s pretty crunchy. This is what it looked like. 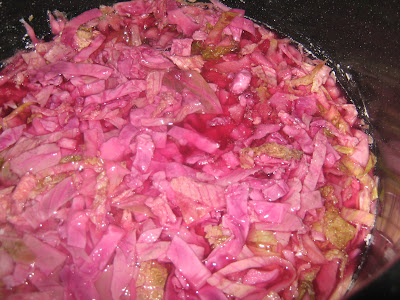 And as I said, it was so salty. So I rinsed it, which I’m pretty sure I wasn’t supposed to do.
Note 5: I think I should have put it in jars in the brine, and then washed it before I ate it.
But I put it into mason jars and mixed in a bunch of caraway seed, which was a really good idea.
Then into the fridge, and apparently should be good for a few months. 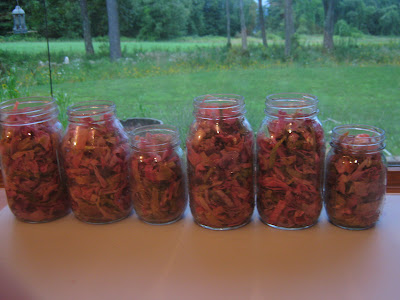 And that’s the story of my kraut, take one. If anyone has any advice on the second batch, please share. I think I could use a little help.