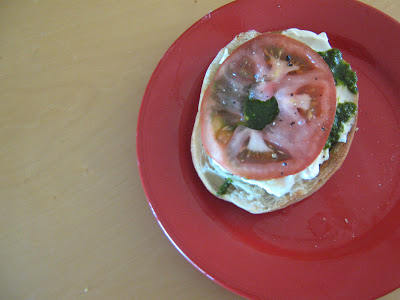 The farm always has the first tomatoes of the summer. Elizabeth starts them early, and grows them in the ground in the greenhouse. People are so excited to see them at the farmer’s market. Tomatoes? This early? You didn’t grow them, did you? they ask. What do they think, that she bought them at Big Y and carted them over? Sometimes I feel like I should have a t-shirt that says, yes, grown in the greenhouse, and let that be that. Once they believe us, they pay a hefty price for them, bitching the whole way. But the thing is, tomatoes have it figured out. They inspire a love that never dies, and people will give their first born for a good early tomato. These early July tomatoes are worth their weight in gold, and we eat them one slice at a time, putting the cut side down on a plate on the counter to take another slice when we’re ready. In a few weeks, there will be more tomatoes, and then we’ll start with dishes that require a whole tomato, or maybe two, and then there will be tomatoes everywhere, and we’ll be trying to give them away, and we’ll turn them into sauce.
This summer, there is more mystery to the love affair. We seem to have been transplanted to the Northwest, and it is cold and rainy. The peas and the kale are thrilled, but the tomatoes might never come. The other night it was 40 degrees, and the sun just doesn’t come out enough to warm the ground. And to top it all off, there’s some crazy blight spreading around that came from Walmart. I don’t really know what blight is, but it sounds scary, especially when it comes from Walmart.
So I’m trying to enjoy the tomatoes, which is not so hard. The other night I stayed up way too late making pesto out of basil, parsley and garlic scapes, and I almost killed my blender. The next morning I had a bagel with pesto, cream cheese and tomato, which might be the best combination in the world. This week, I’m conquering it all, and a breakfast so beautiful is really helpful. That, and a couple extra cups of coffee.