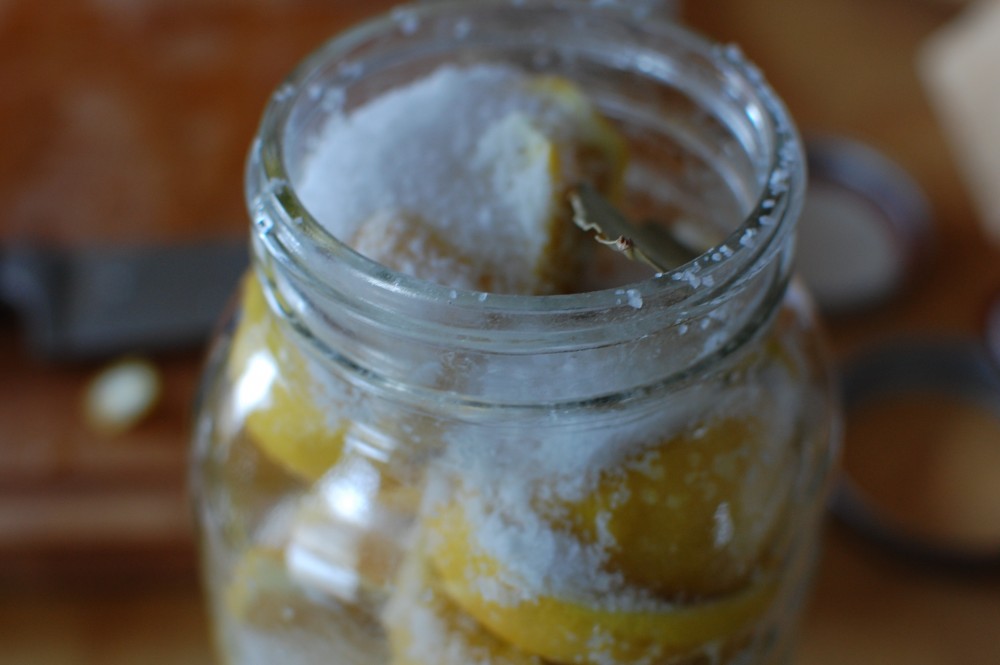 Before we get too deep into this, I need to give you a patience alert on this recipe: Even if you are deeply inspired and you start cutting lemons before you even finish reading this post (watch out for that laptop keyboard! that juice flies!), even if you do that, it will take a full three weeks before you can actually eat them. That’s right, 3 weeks. 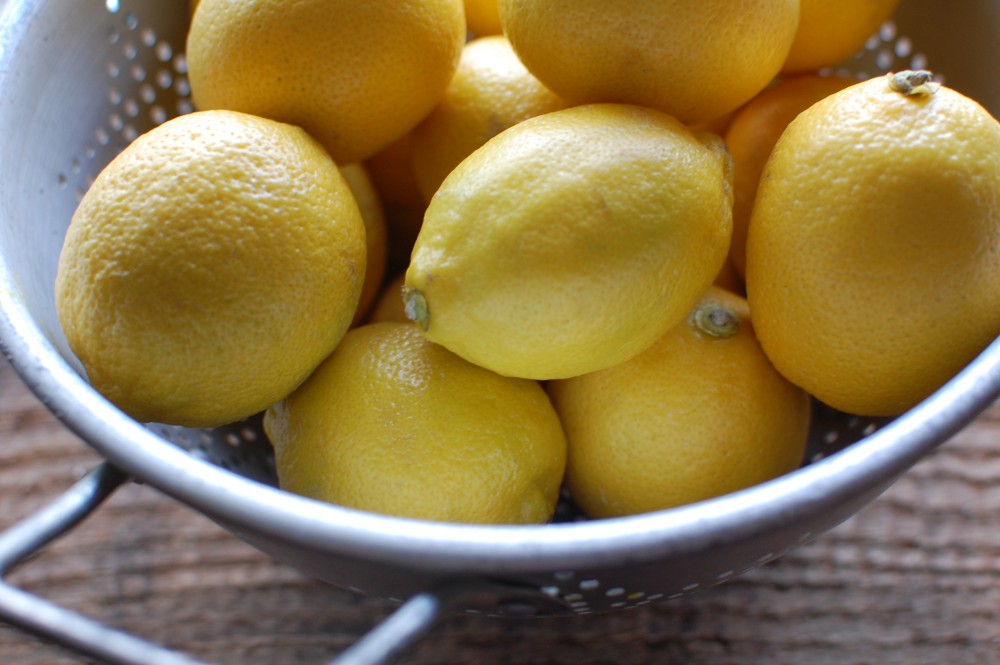 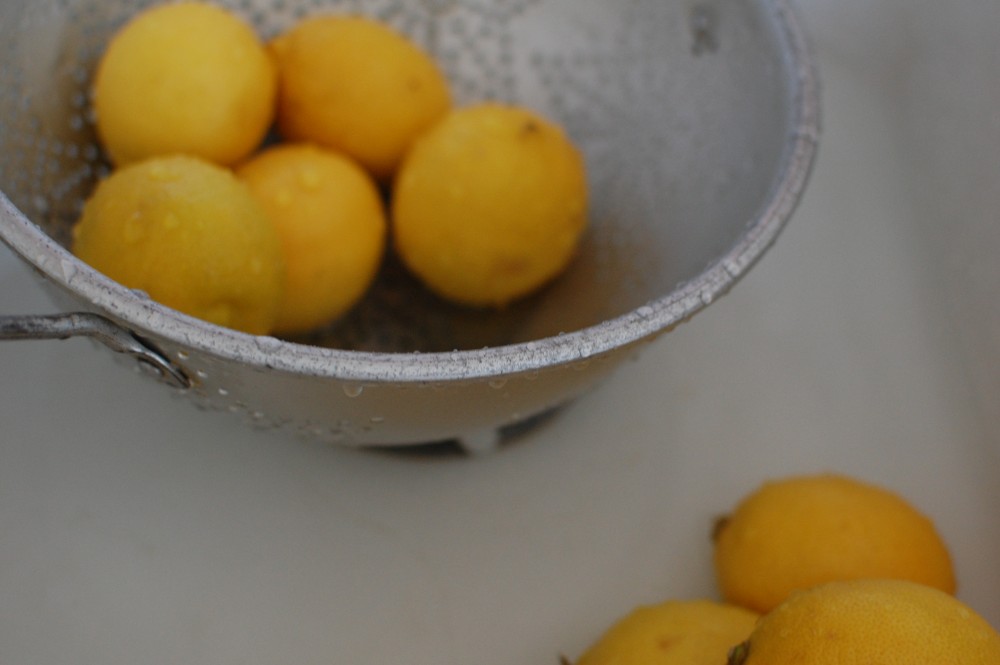 But then I thought about you sitting in your kitchen 3 weeks from now, reading that post about the 3 recipes with NO HOPE OF PRESERVED LEMONS for weeks from then. And so I thought perhaps, instead, that we would wait for our lemons together. 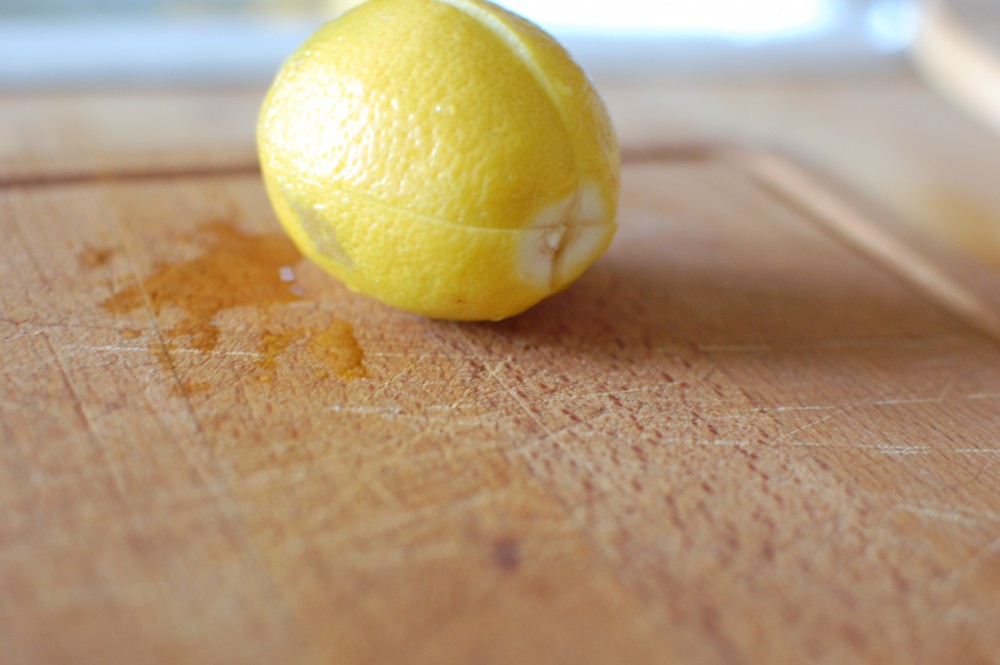 Then we could enjoy them together, too. 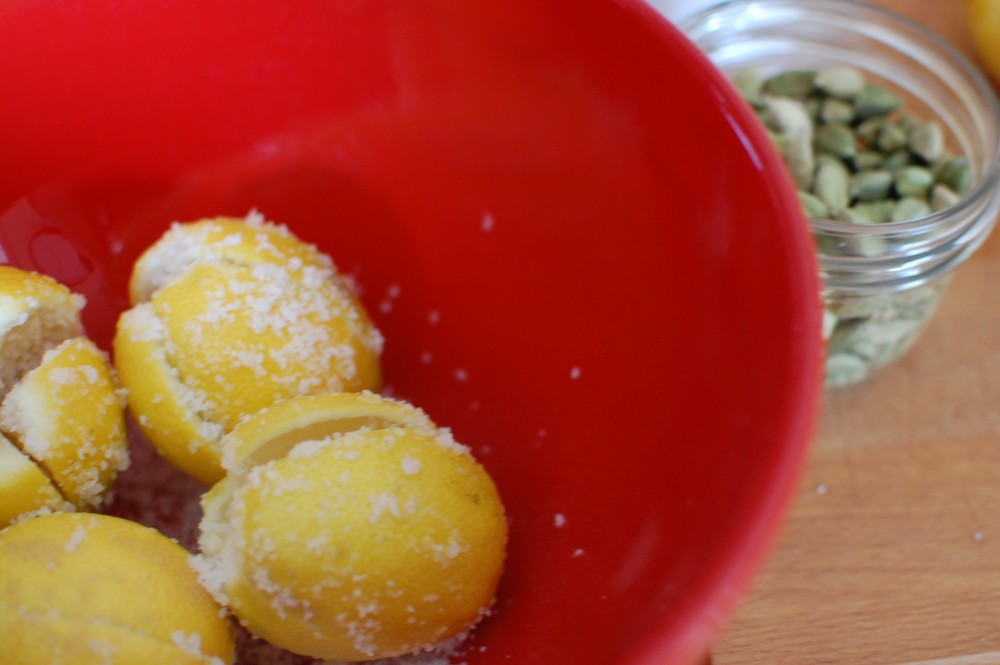 My first preserved lemon came to me several years ago in my friend Ron’s kitchen. He’s one of those cooks who always has some new and magical food on his counter, and on this day, he stuck a fork into a cloudy jar and pulled out a bite of lemon. “Eat this.”
I remember the moment so well because a taste like that will make a memory cling. It was everything about a good fermented pickle, and everything about a lemon, and everything about some new creation when the two combined. I wanted to eat the whole jar. It was that kind of magic. 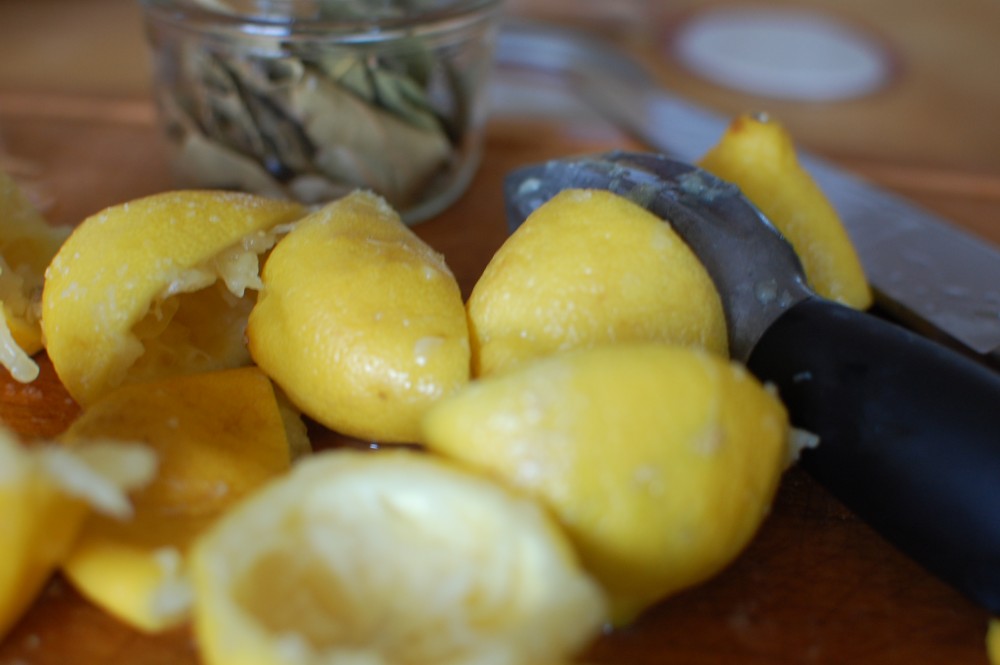 He gave me the recipe, and I never made them. At that point I was only interested in food enough to know that I wanted to create these wonderful things that other people fed me, but I was weak on the follow-through. And a year later, there I was in Janet’s kitchen, and again with the fork, and again with the “eat this,” and again I thought that this might just be the most wonderful and perfectly balanced taste I have ever experienced.
Again, I didn’t make them.
Fast forward to right now, or rather, about a month ago. I was in New York for meetings with a few magazines who had expressed interest in featuring the book in their Spring issues, and I was at Luke and India‘s apartment in Brooklyn for dinner. It was a night of torrential cold rain, and over the course of my train ride down to the city and my subway ride from Grand Central to Brooklyn, I had come to terms with the fact that I had a delirium inducing, thought impeding head cold. My only hope was to insist to my own body that I didn’t have a cold, that I would certainly not be walking around the next day meeting with magazine editors with a red nose and an inability to pronounce the letter “n”. But when I walked into Luke and India’s, the next day was looking pretty grim.
They swooped around me with love and tea and fizzy Vitamin C drinks, and the home they have carved out in that Brooklyn apartment building breathed some life back into me. All of the angry, wet New Yorkers with their poking umbrellas drifted away, and I was cozy on the couch sharing a pot of tea with their little girl, Odette. I was still seeing the world through a cloud, so somehow the details of those few hours twinkle brighter through that haziness. The Christmas tree, still fragrant, cut from the woods on their last trip out of the city. The warmth and the light with the rain so determined to chill the world outside the windows. And on the counter, a whole row of jars of preserved lemons, on their way to gifting.
I picked up a jar. My stomach growled. My mouth watered. “Take one home!” India told me. They weren’t quite ready, but they would be soon. I looked at my bag, already far less classy that what I should have been taking into the offices of Glamour the next day. It was packed, overflowing even, and I was already wondering how I would carry it around me from meeting to meeting. And then I thought about those lemons jostling in my bag, the fermentation building up until some moment when I’m talking to the food editor at O Magazine  and the jar explodes in my bag. (Note: I have never had a jar explode! But on principle it’s not such a good idea to bounce a jar of naturally fermenting pickles around too much, and when one is meeting intimidating people, it is good to err on the side of safety.) For a moment, I thought about how that explosion could really up my credibility. That I am, after all, so into making my own foods at home, that I carry them around me, just to monitor the fermentation! But with as much of a sigh as I could let out through my congestion, I left that jar there on her counter.
After that, I obsessed about those lemons. They stayed with me until I made my very own jar. And now, even through I’m weeks away, I’m patient and calm. Everyday, I admire my jar of lemons. I turn them over, and I appreciate the thick green of bay against the yellow of the rind. I am doing that winter activity of sitting and waiting until the good things are ready to enjoy. This jar filled with sun and green seems to light up the whole counter. This is preservation for the winter.
India uses the recipe from Chez Panisse Fruit, and I’ve mostly used that one here. Some people like to let their lemons process in the fridge, and others let them do their thing on the counter. All that salt and acid make it safe to preserve at room temperature, and then the jar will light up your kitchen, too. 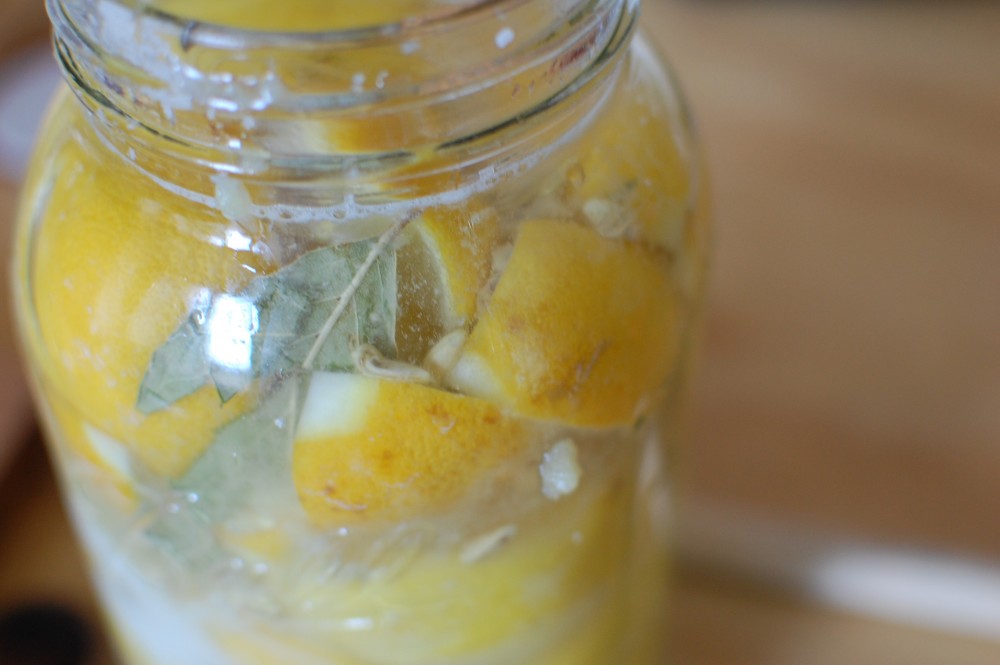 12 to 14 organic medium lemons (meyer lemons are great here too, if you can get them)
1 cup kosher salt
10 cardamom pods
6 bay leaves
2 cups lemon juice, or more, as needed (this can be fresh squeezed or bottled, as long as it is 100% lemon juice without chemical additives)

Sterilize a 1/2 gallon jar by boiling it for ten minutes or running it through a hot dishwasher.
Scrub the lemons to remove any residue (you’ll be eating the peel). Cut off the tip of a lemon. Then cut the lemon lengthwise, leaving the end intact. Cut it again lengthwise at a 90 degree angle to the first cut. The lemons will be quartered, but still attached at one end. Repeat with the other lemons.
Rub the flesh of each lemon with salt. Put a few tablespoons of salt in the bottom of the jar. Then push the lemons into the jar, making a layer of lemons. They will release juice and smoosh a bit- this is good. Now add a layer of salt, a few cardamom pods, and a bay leaf. Repeat until the jar is filled. Press the lemons down with a wooden spoon to make them release more juice. Then pour the lemon juice into the jar so that it fills all of the space around the lemons, and so that it covers the lemons entirely. Cover the jar with a sterilized lid, and shake well.
Let the lemons ferment on the counter, giving the jar a gentle shake or a turnover every day or so. In three weeks, the lemons will be ready to eat. (More then!)